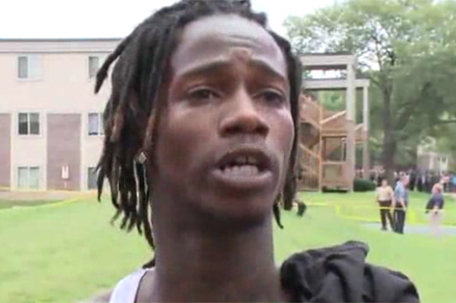 ST. LOUIS–Dorian Johnson, the man who was with Michael Brown when Brown was fatally shot by a Ferguson police officer last summer, has been arrested on suspicion of drug charges and resisting arrest, a St. Louis police source said Wednesday.

Police released details of an incident involving three men taken into custody after officers were called to the 5700 block of Acme Avenue at 3:21 p.m. Wednesday by someone “reporting a large group of subjects who were possibly armed with firearms.”

The police report did not name Johnson, but a police source who spoke on the condition of anonymity said that the incident involved Johnson and two of his brothers. Johnson allegedly had a cough medication mixed with what police believe to be an illegal narcotic on him.

The report said that as the officers who went to the scene dispersed the crowd, they noticed that one man had a bulge in his clothes that they suspected might be a weapon. A second man grabbed the arm of the officer who attempted to pat the first man down. The officer then attempted to detain the second man.

That prompted a third man to approach the officer and yell at him in an attempt to stop the arrest, the report said. That man allegedly then discarded narcotics onto the ground.

All three were arrested. One of Johnson’s brothers was found to be wanted in Bridgeton on warrants for armed robbery and armed criminal action, the police source said.

On Aug. 9, Johnson was walking with Michael Brown when the two were approached by Ferguson police Officer Darren Wilson. The encounter ended with Brown fatally shot and led to months of protests and unrest in Ferguson.

The lawsuit seeks damages, including punitive, of at least $25,000. It also seeks an injunction to prevent the city of Ferguson and its police from engaging in assault, unlawful arrest and excessive use of force.