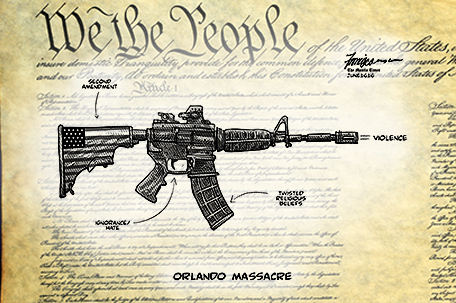 NEW YORK — Wherever you look in this nation born of a bloody revolution of musket fire, chances are there’s sharp disagreement over firearms.

Democrats war with Republicans, and small towns are against cities. Women and men are at odds, as are blacks and whites and old and young. North clashes with South, East with West.

“The current gun debate is more polarized and sour than any time before in American history,” said Adam Winkler, a constitutional law professor at UCLA and author of the 2011 book, “Gunfight: The Battle Over the Right to Bear Arms in America.”

In the midst of debate over the latest mass shooting, in Orlando, it’s easy to imagine that guns have always divided us this way. But a close look at survey data over decades shows they haven’t.

There was a time, not that long ago, when most citizens favored banning handguns, the chief gun lobbyists supported firearm restrictions, and courts hadn’t yet interpreted the Second Amendment as guaranteeing a personal right to bear arms for self-defense at home.

Today, in a country of hundreds of millions of guns, public opinion and interpretation of the law have shifted so much that outright gun bans are unthinkable. It’s true that large segments of the public have expressed support for some aspects of gun regulation – but when Americans have been asked to say which is more important, gun control or gun rights, they trend toward the latter.

That shift has come, perhaps surprisingly, as fewer Americans today choose to keep a gun in their home. The General Social Survey, a massive study undertaken by NORC at the University of Chicago since 1972 and one of the foremost authorities on gun ownership, found 31 percent of households had guns in 2014. That was down from a high of 50.4 percent in 1977.

“Institutions have repeated, ‘More guns, less crime. More guns, less crime,’ over and over again for almost 40 years, and it’s hard to turn that belief around in any easy way,” said Joan Burbick, an emeritus professor at Washington State University who wrote “Gun Show Nation: Gun Culture and American Democracy” and who owns a gun for hobby shooting.

Among the longest-existing measures of public gun sentiment is a Gallup poll question asking whether there should be a law banning handguns except by police and other authorized people. When it was first asked, in July 1959, 60 percent of respondents approved of such a measure.

By last October, only 27 percent agreed.

Many point to a single date as crucial in the societal shift: May 21, 1977, when the National Rifle Association held its annual meeting at a convention hall in Cincinnati.

“That was the moment, in one evening, when the gun debate in America radically changed,” said Winkler.

The turmoil of the country in the 1960s and 1970s roiled institutions of all kinds, the NRA included. The organization had fought gun laws in the past, but also had come to accept some, including the Gun Control Act of 1968. As the next decade wore on and the NRA entered its second century, it faced an identity crisis: Was it a coalition of sportsmen, or a political powerhouse?

Leaders were set on the former, drawing up plans to move its headquarters from Washington to Colorado and to retreat from politics. Some of its most fiery members disagreed, staging a revolt that night that stretched into the next morning, and remade the group’s leadership. Plans for a westward move were scuttled, and a rightward move politically was sealed.

The gun lobby’s increasingly powerful voice found receptive ears among a public that witnessed the country’s civil rights battles, assassinations of beloved leaders and growing lawlessness in cities. Over time, statehouses and Congress bowed to the influence of the NRA and its allies. And in 2008, the U.S. Supreme Court finally declared Americans have the right to a gun for self-defense.

“What they (gun rights advocates) did is a classic example of how you make constitutional change: They realized they needed to win in the court of public opinion before you could win in the court of law,” said Michael Waldman, president of the Brennan Center for Justice at New York University and author of “The Second Amendment: A Biography.”

Pew Research Center data provides a sketch of what the gun-owning populace looks like today:

-74 percent of gun owners are men and 82 percent are white.

-Those in rural areas are more than twice as likely as urbanites to own a gun.

-Ownership rates in the Northeast are lower than in the rest of the country.

-Gun owners are far more likely to identify with or lean toward the Republican Party.

Data from GSS shows gun owners are more likely to have higher incomes – and to vote.

Taken together, this is a description of a motivated and politically potent group. But their clout sometimes obscures a simple fact: Though polarization appears in broad questions on gun rights, far more consensus emerges on individual proposals.

A Pew poll released in August showed 85 percent of people support background checks for purchases at gun shows and in private sales; 79 percent support laws to prevent the mentally ill from buying guns; 70 percent approve of a federal database to track gun sales; and 57 percent favor a ban on assault weapons.

“The fact is it’s not divisive. The things that we’re advocating in the American public, when you’re talking about keeping guns out of dangerous hands, we all agree. We all agree on the solutions,” said Dan Gross, president of the Brady Campaign to Prevent Gun Violence, and whose brother was severely hurt in a shooting. “The only place where this is truly a controversial issue is, tragically and disgracefully, in Congress and in our statehouses across the country.”

In the wake of the Orlando shooting that claimed 49 lives, Democrats mounted a 15-hour filibuster in the U.S. Senate to try to break a stalemate on a gun bill – just as attempts to revive legislation have followed other recent mass shootings, though with little effect. Sen. Susan Collins of Maine, a moderate Republican, likened it to “Groundhog Day,” while Sen. Bill Nelson, a Democrat from Florida, said he couldn’t see how even the NRA could object to a bill such as the one being considered, to keep those on a terrorist watch list from purchasing guns.

There is little expectation that the Democratic bill will pass. “They are accustomed to getting their way around here,” Nelson said of the NRA.

The NRA did not respond to an interview request.

Gross sees signs for hope for gun control supporters. Social media, he said, has helped get out a message that his side, for years, struggled to spread against the deep pockets of the gun lobby. The Democratic presidential primary, in which Hillary Clinton made gun control a flagship issue in differentiating herself from Bernie Sanders, showed it’s not an untouchable political issue. And changing national demographics could further bolster the case of those who favor gun restrictions, because minorities are comprising a larger share of the populace and are less likely to own guns.

Still, this debate remains one of the most toxic in America.

Winkler, the UCLA professor, knows divisiveness. He worked on the defense teams of O.J. Simpson and Michael Jackson. His research has prompted impassioned debates on issues from free speech to campaign finance.

“Nothing has ever come close to the level of vitriol I have seen with guns,” he said. “Both sides feel that life and death is at stake.”

The fear expressed by many gun owners that the government seeks to confiscate their weapons harkens back to the time of the Constitution’s framers. When James Madison first proposed the right to bear arms, Waldman said, it was specifically seen as a right for gun ownership in the service of militias, which were seen as a bulwark against the possible tyranny and risk of overreach from a central government. That rationale for gun ownership still exists among many today.

“People were worrying about overreach from Washington when it was George Washington and not Washington, D.C.,” Waldman said.