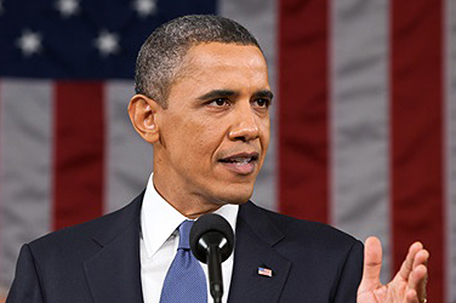 The five Democrats on the debate stage last week in Las Vegas offered a relatively,  and surprisingly, unified front on the issues at the forefront of the campaign.

On solutions, the differences tended to be a matter a degree, rather than diametrical. On President Barack Obama, at times a source of considerable Democratic discontent, their positions ranged from warm embrace to polite disagreement.

The sense of respect and courtesy was in sharp contrast to the public bickering on the other side and the recent history of how parties have dealt with passing control of the White House.

Democrats showed they are willing to embrace Obama’s legacy, whatever the risks. Republicans continue to struggle with the fallout from George W. Bush’s presidency, with years of public soul-searching and animosity toward their leadership.

“You would expect in a Democratic primary field when people are crossing a broad ideological spectrum that they might be critical of the incumbent no matter who the incumbent is,’’ Democratic pollster and strategist Celinda Lake said. “But I think Democrats demonstrated that across the spectrum it’s good to run with the president rather than against him.’’

Under their first national spotlight, leading Democrats put forward no drastic re-imaging of Obama’s signature policies. The candidates largely pledged to build on Obama’s health overhaul, preserve or expand his immigration orders and continue global climate change talks. They indirectly criticized his handling of issues that the party considers to be failings of his tenure: comprehensive immigration changes, gun control, spurring middle class wage growth, cracking down on Wall Street.

Opposition to a Pacific Rim trade pact was the most prominent area of disagreement.

“I think everybody on that stage at the debate affirmed what I have said in the past, which is we agree on 95 percent of stuff and on the basic vision of a country,’’ Obama told reporters.

The candidates’ cohesion around Obama is as much political calculation as a spontaneous exercise.

Obama is popular with Latinos, blacks, young people and unmarried women,  the core coalition that any Democrat will need to win the nomination and the White House. His approval rating hovers around 80 percent among Democrats in Gallup’s recent tracking surveys. Among liberal Democrats, that number moves toward 90 percent. Democrats alienate these groups at their own peril.

Front-runner Hillary Rodham Clinton has started to pull away from Obama, delivering rough comments on his immigration record or deviating from his policy in Syria. But when given the biggest audience of her campaign, she promised to “build on the successes of President Obama’’ and “go beyond.’’

She not only embraced Obama but also used his endorsement of her to deflect criticism. The two once debated her vote on the Iraq War, she noted, and “after the election, he asked me to become secretary of state. He valued my judgment, and I spent a lot of time with him.’’

Clinton’s rivals similarly went easy on the president, even the one whose campaign is built on a harsh critique of his economic policy.

“I have a lot of respect for President Obama. I have worked with him time and time again on many, many issues,’’ said Vermont Sen. Bernie Sanders. It was a softer introduction to his call for “political revolution’’ to unlock the government from what he contends is the control of Wall Street and corporate media.

Still, the collective appreciation for the president and his policies papered over persistent rifts, particularly between the party’s left flank and pragmatic middle.

Sanders’ call to break up the banks is a critique of Obama’s handling of Wall Street regulation. Reflecting concern about crises in the Middle East, the conversation about foreign policy was more contentious. The U.S. needs to “take more of a leadership position’’ in Syria, Clinton said.

It’s hard to imagine the lineup of Republican candidates using such restraint.

The GOP ranks have battled their party’s leadership for nearly all of Obama’s presidency. The conflict has boiled over in recent weeks as conservatives and moderates in the House spar over the speakership, and Republican voters elevate party outsiders Donald Trump and Ben Carson to the top of the presidential polls.

At their recent debates, Republicans have clashed over immigration policy, federal spending, compromising with Democrats and the lessons of Bush’s presidency.

Whether a party breaks up or falls in line at the end of a presidency tends to be determined by how popular or divisive the incumbent is, says Sidney M. Milkis, a political scientist at the University of Virginia’s Miller Center.

Bush left office unpopular in his party and out. The end of the President Lyndon Johnson’s presidency left Democrats in disarray. In rallying around Obama, Democrats resemble Republicans at the end of President Ronald Reagan’s term,  happy with their status quo and looking for more, Milkis noted.

While Obama’s approval rating among Democrats is solid, Republicans are focused on other numbers. His overall job approval is 46 percent, according to Gallup. Pollsters are finding broad dissatisfaction with the direction of the country and a steady distrust of public institutions.

“This is not a country that’s satisfied,’’ said GOP pollster David Winston.

Both parties’ nominees will need to present a distinct, forward-looking agenda that appeals to voters beyond the base. “As Republicans saw in 2012, the idea that you can win a primary and you don’t have to worry about the general ,  that that cake is already baked ,  I think there was a rude awakening there.’’