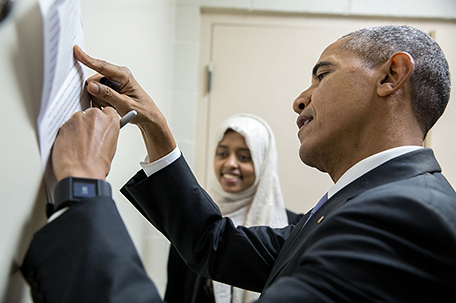 ABOVE PHOTO:  President Barack Obama stops to greets children from Al-Rahmah school and other guests during his visit to the Islamic Society of Baltimore, Wednesday, Feb. 3, 2016, in Baltimore, Md. Obama is making his first visit to a U.S. mosque at a time Muslim-Americans say they’re confronting increasing levels of bias in speech and deeds.   (AP Photo/Pablo Martinez Monsivais)

CATONSVILLE, Md. — President Barack Obama paid his first visit to a U.S. mosque on Wednesday, appealing for tolerance for America’s millions of Muslims and calling to confront the bias and stereotyping that he says is on the rise amid tough talk on terrorism in the presidential campaign.

At the Islamic Society of Baltimore, a suburban campus with a mosque and K-12 school, Obama sat down around a large table with Muslim university chaplains, community activists and public health professionals for a discussion about religious tolerance and freedom. He planned an afternoon speech focused on how the U.S. can more successfully confront extremism if it works with Muslims instead of branding all of them as potential enemies.

For Muslim advocates, Obama’s visit was a long-awaited gesture to a community that has warned of escalating vitriol against them that has accompanied the public’s concern about the Islamic State and other extremist groups. Although Obama has visited mosques overseas in the past, he waited until his final year in office to make such a visit at home, reflecting the sensitivity of the issue.

One of the participants meeting with Obama, Ibtihaj Muhammad, has qualified for a spot on the United States Olympic Team for the Rio de Janeiro 2016 Olympic Games. The White House said she’ll make history as the first United States Olympian to compete in a hijab.

“They all have their own story to tell about the way that they contribute to and enrich the communities in which they live,” said White House spokesman Josh Earnest.

Last week, Obama became the first sitting president to speak at the Israeli Embassy. In remarks at the embassy, he warned of growing anti-Semitism in the world.

Obama’s message at the mosque will follow a similar tack. The White House said he will focus on the need to speak out against bigotry and reject indifference. It’s the kind of effort that Muslim-Americans said they’ve been waiting for from America’s political and religious leaders.

“For some time, we’ve been asking for pushback. Perhaps this will start a trend,” said Ibrahim Hooper, a spokesman for the Council on American-Islamic Relations.

CAIR has tracked a growing number of attacks on mosques and on individuals in the months following the Paris terrorist attack and the shooting rampage in San Bernardino, California. A severed pig’s head was delivered to a mosque’s doorstep in Philadelphia. Someone attempted to set fire to a mosque in Southern California.

Hooper said harassment and bullying is also on the rise. He cited Republican presidential candidate Donald Trump’s call for a ban on Muslims entering the country as an example of how bias toward Muslims has become part of the American mainstream.

“I don’t think there’s ever been this level of fear and apprehension in the Muslim-American community,” Hooper said.

In 2001, President George W. Bush visited a mosque on Washington’s Embassy row just days after the 9/11 attacks, urging Americans to get back to everyday business and not turn against their Muslim neighbors.

For Obama, the visit in his final year in office reflects a willingness to wade into touchy social issues that often eluded him earlier in his presidency. For years, Obama has fought incorrect claims that he’s actually a Muslim and was born in Kenya, beliefs that polls suggest remain prevalent among many Republicans. Obama, a Christian, was born in Hawaii.

With no plans to ever again appear on a ballot, Obama faces less pressure to avoid political controversy. Ahead of his visit Wednesday, White House officials readily acknowledged the visit could spark controversy but suggested that would help make his point about ignorance and religious bias. White House press secretary Josh Earnest predicted Obama’s visit would “prompt exactly the kind of discussion and debate that the president thinks is worth having.”

Nearly half of Americans think at least some U.S. Muslims are anti-American, according to a new Pew Research Center poll released Wednesday. Two-thirds of Americans said people, not religious teachings, are to blame when violence is committed in the name of faith. However, when respondents were asked which religion they consider troubling, Islam was the most common answer.

Meanwhile, some Republicans have criticized Obama for not linking attacks like the one in Paris to “radical Islamic terrorism.” Republican presidential candidates Ted Cruz and Trump have voiced that concern.

Obama has said he refuses to describe the Islamic State and other such groups that way because the term grants them a religious legitimacy they don’t deserve.

In June 2009, just five months into his presidency, Obama toured the Sultan Hassan mosque during a visit to Cairo. In a speech at Cairo University, he declared that the U.S. would never be at war with Islam. “America and Islam are not exclusive,” he said, and share “common principles of justice and progress, tolerance and the dignity of all human beings.”

Attendees at the Baltimore mosque are predominantly of Turkish heritage, although immigrants of other nationalities also participate, said Akbar Ahmed, an Islamic studies specialist at American University who has researched mosques around the U.S.

Obama left it to the last minute to visit a U.S. mosque, Ahmed noted, “but better late than never.”