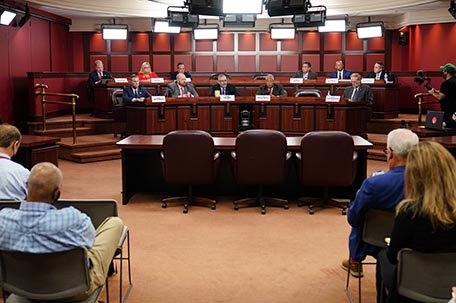 HARRISBURG, Pa.— The deadline passed Friday for Gov. Tom Wolf’s administration to comply with a subpoena from a Republican-controlled state Senate committee pursuing what the GOP calls a “forensic investigation” of last year’s presidential election, as a state court sorted through three legal challenges. Wolf’s administration and Senate Republicans remained silent in the matter Friday. The court was expected to set up an expedited briefing schedule in one or all of the cases.

Challengers, including Senate Democrats and state Attorney General Josh Shapiro, have sought broadly to block the subpoena, saying it is an abuse of legislative power, and in particular have challenged its request for the driver’s license numbers and partial Social Security numbers of roughly 9 million registered voters. Republicans maintain that they are attempting to find and fix problems in last year’s presidential election and this year’s primary election. Democrats accuse them of helping perpetuate baseless claims that former President Donald Trump was cheated out of victory.

It’s not clear whether Wolf’s administration can be forced to comply with a Senate subpoena.

The subpoena comes as Trump and his allies pressure battleground states to investigate ballots, voting machines and voter rolls for fraud. Democrats say it is part of a national campaign to take away voting rights and undermine both democracy and elections.

Democrat Joe Biden beat Trump in Pennsylvania by more than 80,000 votes, according to certified results. Approved two weeks ago, the subpoena seeks detailed state election records, including communication with counties and the names of who voted in last year’s presidential election, their birth date, address, driver’s license number and the last four digits of their Social Security number.

The subpoena stops short of requesting ballots and voting machines, as was done in Arizona’s widely discredited and partisan “audit,” and the majority of the information being requested is already available to the public, Shapiro has said.

Raff Donelson, an associate professor of law at Penn State’s Dickinson Law School, said the strongest legal objection appears to be the claim around private information, such as drivers’ license numbers and partial Social Security numbers.

Pennsylvania law prohibits the release of that information, which is required of voters when they register, and Donelson said case law in Pennsylvania requires proof of probable cause for the government to get private information.

“Given the kind of information the committee is looking for, I think there’s a really strong case that this violates the constitution,” Donelson said.

In a statement last Friday, the chairman of the Senate Intergovernmental Operations Committee, Sen. Cris Dush (R- 25th Dist.), said the committee wants the information “to cross match and verify whether or not our voter registration system has duplicate voters, dead voters, and/or illegal voters.” Previously, Dush had said the detailed voter information is necessary to investigate unproven allegations that voters who had cast ballots were registered as living at a condemned building. Courts have long understood that legislative bodies have a power to investigate that is contained within their power to make laws, but it’s not clear how having the private information of voters will help lawmakers make laws, Donelson said. It’s also not clear that the committee has probable cause to seek private information, Donelson said.