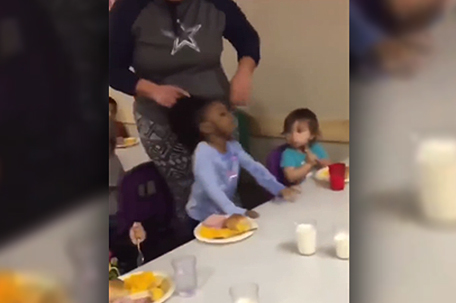 LUBBOCK, TX — My Little Playhouse, a daycare center in Texas, is under fire after one of its workers was caught on video pulling a young Black girl’s hair trying to make her eat her food. Police and state officials are now investigating the situation.

The video shows the daycare worker pulling on the girl’s braided hair, seemingly forcing her to follow her instructions and eat in a cafeteria while other children are around.

The officials of the daycare, My Little Playhouse, confirmed that the worker shown on the video and the worker who took the video has been terminated already.

They have issued a statement saying, “The owners and Directors of My Little Playhouse Learning Center LLC were made aware of video footage posted on social media at approximately 11:45 a.m. Staff involved were fired immediately. Local authorities (LPD) has been notified and are investigating accordingly. Texas Department of Childcare Licensing has also been notified.”

Paul Zimmerman, a spokesman for the Texas Department of Family and Protective Services, said that the agency will also conduct an investigation regarding the incident for apparent abuse or neglect. The Department of Health and Human Resources, which handles licenses for child care providers, will decide depending on the results of the investigation.

Meanwhile, Shanna Walker, the grandmother of the girl on the video was shocked and furious when she watched the video 20 minutes before she came to the daycare to pick up her granddaughter. She thought that the daycare workers are “supposed to be people that are taking care of [the kids] that has their well being at heart,” she told WLBT.

“I know that everyone thinks that their grandchildren are the best,” she added. “But this little girl, she is the sweetest little girl that you could ever know. And she’s very quiet and very timid. So, for her to sit there and just to pull on her hair — it’s very infuriating. I mean I’m standing here right now, feeling like I’m about to boil over.”

What to look for in a daycare center for your baby

Silver hair: The hair color trend young women are making their own