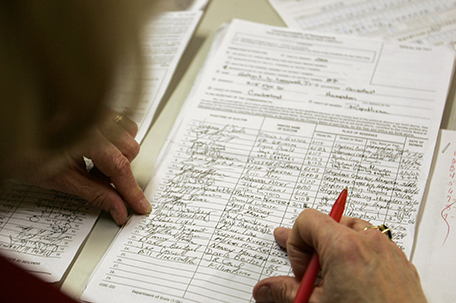 ABOVE PHOTO: This file photo from March 7, 2006 shows Barbara Dubler at the state elections bureau, in Harrisburg, Pa., as she checks the signatures on Gil Longwell’s nominating petition to run for the State House in that years primary election. Pennsylvania’s Supreme Court on Wednesday Feb. 9, 2022 put a temporary hold on the period for candidates and their supporters to circulate petitions to qualify for Pennsylvania’s May 17 primary election. (AP Photo/Carolyn Kaster, File)

HARRISBURG, Pa. — The period for candidates and their supporters to circulate petitions to qualify for Pennsylvania’s May 17 primary election was put on temporary hold Wednesday by the state Supreme Court.

The justices issued an order that applies to all races — congressional and legislative contests, as well as U.S. Senate, governor and lieutenant governor.

The three-week petition gathering period was set to kick off Tuesday and last for three weeks. Instead, the high court noted it was hearing oral argument on Feb. 18 in a case that will determine the lines of congressional districts.

Administrative Office of Pennsylvania Courts spokeswoman Stacey Witalec said the order pertains to all races and keeps the primary date intact. The order did not say when the court will produce a new petition gathering period.

A spokeswoman for Democratic Gov. Tom Wolf said the court’s order was under review.

Candidates for office must collect a certain number of valid signatures from registered voters of their same party to get on the primary ballot. The number of signatures needed depends on the office for which they’re running.

In the congressional redistricting case, a lower court judge on Monday recommended a new map of the state’s 17 congressional districts and suggested alterations to the petition gathering period. The Supreme Court will have the final say, and could delay the primary election date.

State Rep. Summer Lee, D-Allegheny, said putting the petition circulation schedule on hold is something she’ll have to adapt to as she works to get on the ballot for a Pittsburgh-area congressional seat.

“It’s not easy to get these signatures, it takes a lot of work,” Lee said. “So to not have definitive answers is sort of challenging but not insurmountable.”

Lee said she had already figured out that the petition gathering period was not likely to start next week because of the pending litigation.

“The thing that we’re most anxious about is to get some maps,” Lee said.

Charlie Gerow, seeking the Republican gubernatorial nomination, said he was not concerned about the delay.

“We’re ready to go whenever they give the green light,” Gerow said.

Commonwealth Court Judge Patricia McCullough suggested that the court not change the primary date but delay the petition period by two weeks, to March 1, and compress it to two weeks so that it ends March 15. Pennsylvania has lost a U.S. congressional seat, so the current 18-district map can’t be used this year.

In a separate process to redraw state House and Senate district boundaries, the Legislative Reapportionment Commission voted Friday for a new set of maps. In that matter, parties have until March 7 to take any challenges to the state Supreme Court. Those challenges would likely take a few weeks to resolve.