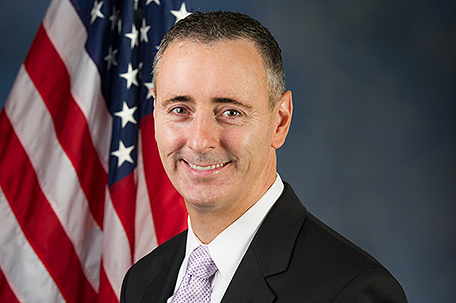 The request comes as law enforcement in communities across the country are reporting a surge in acts of domestic violence during the COVID-19 pandemic.

“With people across our nation complying with stay-at-home orders, law enforcement has unfortunately seen an increase in the number of domestic violence calls they are receiving,”  Fitzpatrick said. “We must address this situation immediately and support funding for safe housing for domestic violence victims, their children, and their pets. Everyone deserves to feel safe and to be safe, and this funding is an important step toward that goal.”

“The prolonged period of isolation necessary to control the spread of coronavirus has led to dramatic increases in domestic violence, and those affected need our immediate help,” Clark said. “Most transitional housing services and shelters are currently unable to accommodate survivors with their pets, and as a result, many stay in dangerous situations to protect their pet family members. We urgently need this targeted, emergency assistance to keep both survivors and their pets safe.”

“The impact of the coronavirus has caused significant hardships for Americans across the country and has tragically led to a surge in domestic violence cases,” Buchanan said. “Additional funding for domestic violence shelters and housing assistance will help keep thousands of victims safe from being trapped with their abuser. We need to act swiftly and get this support to those who desperately need it.”

“The troubling increase in reports of domestic violence during the COVID-19 pandemic highlights how we need to do more to empower survivors,” Porter said. “Forcing people to choose between staying with an abuser or caring for their family — pets included — is just plain wrong. I’m proud to help lead this strong bipartisan effort that would better protect survivors.”

On April 6, United Nations Secretary-General António Guterres called on governments around the world to make addressing the issue of domestic violence a key component of their response to the pandemic, citing a significant uptick in domestic violence reporting by law enforcement amid global lockdowns.

With more than 96% of Americans living under stay-at-home orders, police in several cities across the country reported doubt-digit increases in domestic-violence related calls throughout the month of March compared to 2019 or earlier months in 2020.

Despite the prevalence of this problem, roughly 3% of all domestic violence shelters in the United States are capable of accommodating companion animals.

In December 2018, the Pet and Women Safety (PAWS) Act was enacted to protect domestic violence victims and their pets by strengthening federal domestic violence protections to include threats or acts of violence against a victim’s pet.

The PAWS Act also provides grant funding to shelters and transitional housing services that offer assistance for domestic violence victims with pets. The additional $4 million requested by the lawmakers would fund the Department of Justice’s Emergency and Transitional Pet Shelter and Housing Assistance grant program to help affected survivors and their companion animals during the pandemic.