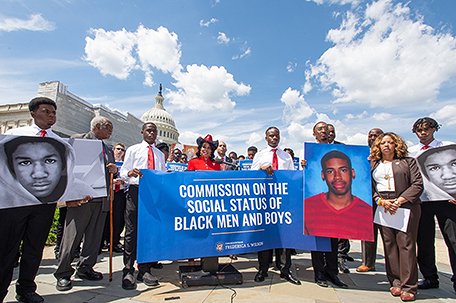 ABOVE PHOTO: U. S. Rep. Frederica Wilson (D-Fla.), center, introduces a Commission on the Social Status of Black Men and Boys.

Nearly five years after Daniel Pantaleo, a New York City policeman, recklessly choked Eric Garner to death, he is just now facing prosecution at a disciplinary trial that may — or may not — lead to his firing. The officers who stood idly by during the incident that was just one of a series of needless police killings of African American men and boys will likely not have to pay for their inaction.

It is this casual disregard for the safety and well-being of Black males that led Congresswoman Frederica S. Wilson (D-Fla.) to create the Commission on the Social Status of Black Men and Boys Caucus. Co-chaired by Reps. Hakeem Jeffries (D-N.Y.), Cedric Richmond (D-La.), and Lucy McBath (D-Ga.), the caucus publicly introduced legislation at a press conference last week to establish an advisory body that will examine the societal inequities that adversely affect this demographic.

They were joined by several other lawmakers, representatives of national organizations, and Tracy Martin, father of slain teenager Trayvon Martin. In addition, dozens of boys who are members of the 5,000 Role Models of Excellence Project mentorship program Wilson founded 25 years ago traveled to Washington from Miami and Jacksonville to participate in the event.

“We are here because we acknowledge a tragic truth: all too often, Black males in America are treated as their own class of citizen,” Wilson said. “They are rarely given the benefit of the doubt. They are labeled delinquent, not rowdy. They are hardened criminals, not misguided youth. Their very existence is often seen as a threat.”

The Commission on the Social Status of Black Men and Boys Act of 2019 calls for a bipartisan commission to be housed within the U.S. Commission on Civil Rights’ office. Led by a staff director, its 19 members would include appointees from the Senate and the House, the Congressional Black Caucus chairperson and five CBC members, as well as representatives from federal agencies and nongovernmental organizations.

One year after their first meeting, members will be required to produce an annual report that includes recommendations to address these issues. In addition, the report, which will be publicly available, will be submitted to the president and cabinet secretaries, Congress, and the chairs of the appropriate committees of jurisdiction.

Rep. Jeffries noted in his remarks that while African Americans have made “tremendous progress,” there is still a long way to go.

“We understand that when America catches a cold, the Black community often catches a fever,” the New York lawmaker said. “When the Black community catches a fever, it’s young Black men and boys at the center of the affliction of economic pneumonia. You can’t continue to ignore realities of this situation, which is why this Commission on the Social Status of Black Men and Boys is so incredibly important. We all recognize that unless we take the time to give our young men and our young Black boys the opportunity to be successful, the system will seize the opportunity to give these men and young Black boys some [jail] time.”

Jamonza Clark, a sophomore at Miami’s William H. Turner Technical Arts High School, feels blessed to be a part of Wilson’s Role Models program and a strong family unit, but recognizes that there are countless boys who look like him whose futures are very uncertain.

“Many of us live in ZIP codes that don’t have the same resources and opportunities that give our white counterparts head starts in life,” he said. “How are we supposed to get ahead when on the day we are born, we’re already behind?”

Rep. Richmond empathizes with boys and men who are judged by the color of their skin or what they wear. Sports, he said, is the one area where all the rules are the same for everybody, and African Americans excel.

“So when we start talking about the game of life and making sure that our young men achieve the success that they should, then we have to look at all of the barriers,” Richmond said.

Rep. McBath, who is serving her first term in Congress, experienced every parent’s worst nightmare when her 17-year-old son, Jordan Davis, was gunned down at a Jacksonville gas station because his killer thought the music in the teenagers’ car was too loud.

“I was teaching him to stand up against unrighteousness and to stand up in the face of injustice. I was preparing him to take his place in this world at the decision-making table as a powerful young Black man. My son, like so many others, was a victim of implicit bias and racism and I feel an obligation in my core to address these issues on behalf of each of the young men that are standing here today full of potential and destined to do great things,” she said, adding that any form of discrimination, “both explicit and implicit” is unacceptable.

Turning to the 5000 Role Models of Excellence students, McBath continued.

“I implore each of you to stand up,” she said. “You deserve to have a place at the table and decide the course of our world. I believe in all of you. This is what democracy looks like, and this is how we will change our world.”