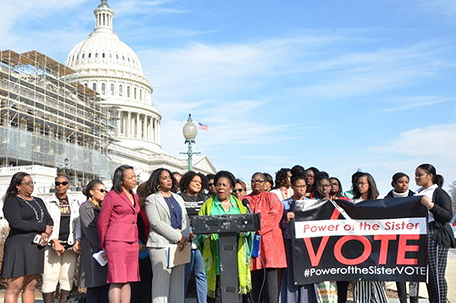 Empowered with a record 55 members on Capitol Hill, the chairwoman of the Congressional Black Caucus has teamed up with a coalition of civil rights groups to mobilize African Americans across the country behind a progressive legislative agenda to write a new chapter of American history that is now being led by women and people of color.

When she was sworn in as chair of the Congressional Black Caucus, Rep. Karen Bass (D-Calif.) said the occasion marked the beginning of “correcting the trauma that we have all experienced on a daily basis for the last two years.”

Recently on Capitol Hill, Bass teamed up with her female colleagues and a coalition of civil rights activists, led by the Black Women’s Roundtable, to expound upon that effort.

“Women are confronting the discrimination that represents the intersectionality of being Black and being a woman,” said Rep. Bonnie Watson Coleman (D-N.J.), one of several CBC members who spoke at the March event about their legislative priorities. “We stand up for voting rights and the re-enfranchisement of individuals who have paid their debt to society. We stand up for social justice and comprehensive criminal justice reform.”

Rep. Brenda Lawrence (D-Mich.), a member of the House Appropriations Committee, said “we are in a fight to close the wage gap,” and Rep. Barbara Lee (D-Ca.) said with the record number African Americans and females in Congress, she is constantly reminded that “It is African American women who will help us to regain the soul of America.”

Rep. Sheila Jackson Lee (D-Texas), a member of the House Judiciary Committee, said that after years of trying in vain to get any type of gun control legislation through Congress, this year it might finally happen. “It’s our time for change and we are mobilizing through your efforts Sister Melanie: Black American women across the country.”

Jackson-Lee was referring to Melanie L. Campbell, president and CEO, of the National Coalition on Black Civic Participation and national convener of the Black Women’s Roundtable. She hosted a five-day gathering that brought more than a dozen female activists to the steps of the U.S Capitol as just one of the BWR events that marked Women’s History Month in March. Thousands of young and pioneer leaders participated in the 7th Annual BWR Women of Power National Summit themed, “Time for A Power Shift!!!”

Campbell, whose organization is dedicated to organizing voters and fighting against voter suppression said, “We are determined to make sure that we save our democracy from peril.”  Echoing those sentiments were a number of speakers from across the country.

Kristen Clarke, president and executive director of the Lawyers Committee for Civil Rights Under Law, declared “Now is the time to hold corrupt officials accountable who take actions to harm voters.”

Welchlin talked about how a young mother died in Houston, Mississippi after she had an asthma attack because the emergency room at the closest hospital to her home had been closed because of Medicaid cutbacks.

“The closest hospital was 30 minutes away,” Welchin said. “It’s criminal. Shateria Sade Shoemaker died. She had an asthma attack. Why did the hospital close? We need Congress to pass and fund the budget for safety net programs.”