Congress returns amid pressure to act on gun violence 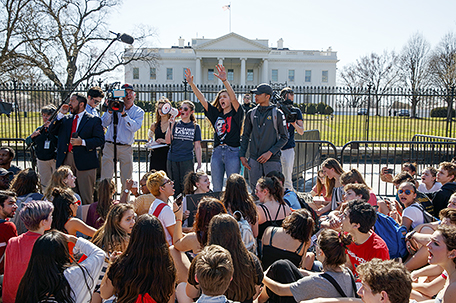 ABOVE PHOTO:  Demonstrators take part in a student protest for gun control legislation in front of the White House, Wednesday, Feb. 21, 2018, in Washington. (AP Photo/Evan Vucci)

By Lisa Mascaro and Matthew Daly

WASHINGTON — After a 10-day break, members of Congress are returning to work under hefty pressure to respond to the outcry over gun violence. But no plan appears ready to take off despite a long list of proposals, including many from President Donald Trump.

Republican leaders have kept quiet for days as Trump tossed out ideas, including raising the minimum age to purchase assault-style weapons and arming teachers, though on Saturday the president tweeted that the latter was “Up to states.”

Their silence has left little indication whether they are ready to rally their ranks behind any one of the president’s ideas, dust off another proposal or do nothing. The most likely legislative option is bolstering the federal background check system for gun purchases, but it’s bogged down after being linked with a less popular measure to expand gun rights.

The halting start reflects firm GOP opposition to any bill that would curb access to guns and risk antagonizing gun advocates in their party. Before the Feb. 14 shooting at a high school in Parkland, Florida, that killed 17 people, Republicans had no intention of reviving the polarizing and politically risky gun debate during an already difficult election year that could endanger their congressional majority.

“There’s no magic bill that’s going to stop the next thing from happening when so many laws are already on the books that weren’t being enforced, that were broken,” said Rep. Steve Scalise, (R-La.), the third-ranking House GOP leader, when asked about solutions. “The breakdowns that happen, this is what drives people nuts,” said Scalise, who suffered life-threatening injuries when a gunman opened fire on lawmakers’ baseball team practice last year.

Trump’s early ideas were met with mixed reactions from his party. His talk of allowing teachers to carry concealed weapons into classrooms was rejected by at least one Republican, Florida Sen. Marco Rubio. House Speaker Paul Ryan, and Senate Majority Leader Mitch McConnell, both spoke to Trump on Friday. Their offices declined comment on the conversations or legislative strategy.

Some Republicans backed up Trump’s apparent endorsement of raising the age minimum for buying some weapons.

Sen. Pat Roberts, said he would support raising the age limit to buy a semi-automatic weapon like the one used in Florida. Rubio also supports lifting the age for rifle purchases. Rep. Brian Mast, a longtime NRA member, wrote in The New York Times that he now supports an assault-weapons ban.

Pennsylvania Sen. Pat Toomey, said he expects to talk soon with Trump, who has said he wants tougher background checks, as Toomey revives the bill he proposed earlier with Sen. Joe Manchin, to expand presale checks for firearms purchases online and at gun shows.

First introduced after the Sandy Hook Elementary School shooting in 2012 in Connecticut, the measure has twice been rejected by the Senate. Some Democrats in GOP-leaning states joined with Republicans to defeat the measure. Toomey’s office said he is seeking to build bipartisan support after the latest shooting.

“Our president can play a huge and, in fact, probably decisive role in this. So I intend to give this another shot,” Toomey said Sunday on NBC’s “Meet the Press.”

The Senate more likely will turn to a bipartisan bill from Sens. John Cornyn and Chris Murphy to strengthen FBI background checks — a response to a shooting last November in which a gunman killed more than two-dozen people at a Texas church.

That bill would penalize federal agencies that don’t properly report required records and reward states that comply by providing them with federal grant preferences. It was drafted after the Air Force acknowledged that it failed to report the Texas gunman’s domestic violence conviction to the National Criminal Information Center database.

The House passed it last year, but only after GOP leaders added an unrelated measure pushed by the National Rifle Association. That measure expands gun rights by making it easier for gun owners to carry concealed weapons across state lines.

The package also included a provision directing the federal Bureau of Alcohol, Tobacco, Firearms and Explosives to review “bump-stock” devices like the one used during the shooting at a Las Vegas music festival that left 58 people dead and hundreds injured.

Murphy told The Associated Press he was invited to discuss gun issues with the White House and he was interested in hearing the president’s ideas. He said he did not expect the Florida shooting to lead to a major breakthrough in Congress for those who’ve long pushed for tighter gun laws.

“There’s not going to be a turning point politically,” he said. Rather, it’s about “slowly and methodically” building a political movement.

Senate Democrats say any attempt to combine the background checks and concealed-carry measures is doomed to fail.

Senate Minority Leader Chuck Schumer said he was skeptical Trump would follow through on proposals such as comprehensive background checks that the NRA opposes.

“The real test of President Trump and the Republican Congress is not words and empathy, but action,” Schumer said in a statement. He noted that Trump has a tendency to change his mind on this and other issues, reminding that the president has called for tougher gun laws only to back away when confronted by resistance from gun owners. The NRA’s independent expenditure arm poured tens of millions into Trump’s 2016 campaign.

“Will President Trump and the Republicans finally buck the NRA and get something done?” Schumer asked. “I hope this time will be different.”