Comparing Kim Davis to Rosa Parks is the ultimate insult 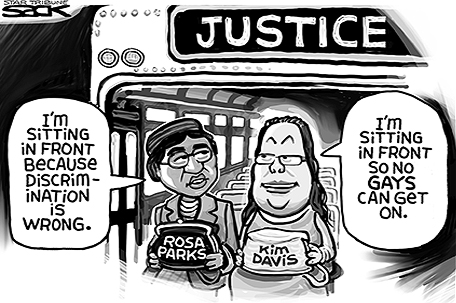 There is no greater idiocy and insult than to compare Kentucky county clerk Kim Davis’s defiance of the law to  that of civil rights icon Rosa Parks. But some GOP notables and conservatives are falling all over themselves to do so. One obscure clerk invoking God and religion to justify not issuing marriage licenses to same sex couples does not put her in the same league with Parks.

There’s really no need to waste a lot of time trying to tick off the ways that Davis hardly could be compared to Parks. Suffice it to say that Parks was a deeply committed civil rights activist and NAACP member before she was jailed for defying a segregation statute, did not have the benefit of a party’s presidential candidates vying for photo-ops with her, and after her release was still subject to the same Jim Crow segregation laws and the threat of physical abuse. Parks’s act struck a blow against bigotry, intolerance, and the century long denial of rights for African-Americans. Davis’s act did the exact opposite.

The ridiculous comparison of Davis to Parks really shouldn’t surprise, however. The GOP and ultra conservatives have long tried to have their cake and eat it too when it comes to making false, phony, and self-serving comparisons with and even a feigned embrace of the Civil Rights Movement’s legacy and heroes. It regularly tossed out Dr. Martin Luther King Jr.s’ name to hammer Affirmative Action programs by latching onto and distorting to King’s “I Have a Dream” speech to purport that he would be opposed to these programs. Some even tried to drag him into the controversy over the Black Lives Matter movement by saying that he’d be appalled at its actions.

But it’s Parks’  that has always seemed to draw the GOP’s fascination and blatant opportunism. This was on horrid display in December, 2013. The occasion was the 58th anniversary commemoration of the day that Parks refused to give her seat up on a segregated Montgomery bus and was jailed. The Republican National Committee moved quickly and tweeted a salute to Parks. “Today we remember Rosa Parks’ bold stand and her role in ending racism.”

The tweet provoked a justifiable storm of outrage aimed squarely at the gigantic absurdity that Parks’ brave act by itself was enough to end racism. The RNC quickly retweeted and inserted the word” “fighting” in place of “ending” before the word racism.

As idiotic as the original RNC tweet was, the outrage over that should have been minor over the far bigger RNC problem, namely its self-serving delusion that the GOP has shed its chronic racial pandering. RNC Chairman Reince Priebus feeds that delusion when he loudly proclaims that the GOP is doing a deep soul search on race and that he wants the GOP to do everything to woo more blacks, Latinos, Asians to the party. Priebus said that the GOP could show that it “cares’ about them too.

The problem is that Priebus or someone else forgot to tell that to his party. The borderline racial taunts, digs, and jabs at President Barack Obama all under the guise of opposing every Obama initiative has continued unabated. The always predictable racial outbursts from Tea Party followers, some GOP officials, and rightwing bloggers and talk radio jocks have been unending.

Top GOP officials will issue a wrist slap pro forma denunciation or with more likely, say nothing. Again, this reaffirms what the overwhelming majority of blacks and Latinos already know and that’s the GOP is the inherent enemy of their interests through its relentless assault on health care reform, Medicare, Medicaid, and Social Security, its loud clamor to slash and burn if not outright eliminate dozens of programs that directly benefit the poor and working class.

The clincher was the initial Parks’ tweet. The very fact that the RNC could credit Parks heroic act in Montgomery, Alabama in 1955 as “ending” racism spoke volumes about the GOP’s mindset.

This still leaves the problem of conservative’s continuing to invoke Parks, King and the civil rights movement to cover bigotry or worse, as in the case of Davis, make an invidious comparison of the defenders of bigotry to those who steadfastly fought against it. The civil rights movement is the stuff of universal respect and nostalgia. Its heroes are legendary and thus the temptation to invoke their names.

Invoking Davis’s name in the same breath with Parks is the ultimate insult.

Earl Ofari Hutchinson is an author and political analyst. He is a frequent MSNBC contributor. He is an associate editor of New America Media. He is a weekly co-host of the Al Sharpton Show on American Urban Radio Network. He is the host of the weekly Hutchinson Report on KTYM 1460 AM Los Angeles and KPFK 90.7 FM Los Angeles and the Pacific.