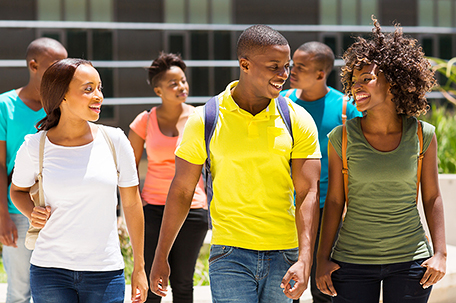 For that reason, UC officials filed a friend-of-the-court brief in the Supreme Court’s review of a nearly identical ban at Michigan’s public universities.

“The UC experience is highly relevant,” their brief said. Nearly two decades after the ban passed, “the University of California still struggles to enroll a student body that encompasses the broad racial diversity of the state.”

The takeaway from UC’s experience isn’t clear-cut. The percentage of admitted Latino and African American resident applicants at the UC system’s most competitive campuses in Berkeley and Los Angeles dropped to 12 percent in 2013 from about 46 percent before Proposition 209’s affirmative-action ban was approved by voters in 1996.

Since California banned the use of affirmative action in admissions 18 years ago, officials at the statewide university system say minority enrollment at the most competitive campuses, in Berkeley and Los Angeles, has slid. But several scholars—at UC and elsewhere—say the university has overstated the negative impact of Prop. 209, pointing to research that shows the number of minority students at UC overall has grown and these students’ graduation rates have improved.

While the numbers of incoming African-American students is down at the two most elite campuses, and Latino enrollment at both hasn’t kept pace with California’s fast-rising Latino population, the percentage of incoming freshmen Latino and African-American resident students roughly doubled during the same period across UC’s undergraduate campuses.

Now nearly two decades after Prop. 209 was passed, affirmative action in college admissions is at a crossroads.

In November 2012, Michigan’s higher-education affirmative-action ban was overturned by the Sixth U.S. Circuit Court of Appeals. A decision in the case, Schuette v. Coalition to Defend Affirmative Action, is expected soon.

If the Supreme Court affirms the lower court’s ruling, California and a handful of other states could use the precedent to challenge their own bans. Washington, Nebraska, Arizona, Oklahoma, Florida and New Hampshire also have banned public institutions from employing race-based affirmative action.

UC has spent more than a half-billion dollars since 1998—when the ban took effect—on outreach programs and has tailored eligibility requirements and application reviews to attract and admit more low-income and first-generation students, many of whom are minorities. System leaders say they are still unable to meet diversity goals systemwide—particularly at UCLA and Berkeley.

When the state’s most elite universities are less diverse, she said, “It doesn’t provide our students with a level of diversity they need in order to learn about other cultures and other communities,” which she says is important for the state’s future leaders.

The UC system “trains judges, doctors and politicians for California,” Ms. Robinson said. When those students leave the state, “that’s not necessarily good for us.”

According to university research, she said, “students of color who are at the very top of their class and have everything it takes to get into a great private or public institution—many of those students will be admitted to private colleges and universities and…often get very positive scholarship packages.”

Researchers say minority students have benefited in some ways from changes to affirmative action. In a 2013 paper, a group of economists at Duke University and the London School of Economics found that “underrepresented minorities were 4.4 percentage points more likely to graduate” systemwide after Prop. 209 went into effect, which they attribute in part to the schools “focusing more resources on the retention of their enrolled students.”

Peter Arcidiacono, a Duke professor and one of that study’s authors, says affirmative-action bans have had “very little effect on whether [minority] students enroll in college or graduate from college, but it does affect where they graduate from.” That was evident, he said, in those students’ “big shift away from graduating from UCLA and Berkeley.”

Richard Kahlenberg, an education researcher at the liberal think-tank the Century Foundation, says it is wrong to view the experience of prestigious schools like Berkeley, UCLA and the University of Michigan as emblematic of the impact of race-neutral admissions policies.

In a 2012 study of 10 public universities that employed “race-neutral alternatives to affirmative action”—such as California’s outreach and changes to eligibility criteria—Mr. Kahlenberg’s organization found that at seven, “the representation of African-Americans and Latinos met or exceeded the levels achieved when the universities had used racial preferences.”

Berkeley, UCLA and the University of Michigan were the exceptions, he said, because they are recruiting the same group of students as many elite private colleges that can consider race in admission and offer more scholarships. Competitive public universities face “a tilted playing field.”

Should opponents reverse the ban, the UC system could again consider race in admissions, but schools would face new federal guidelines.

Following a Supreme Court ruling last year on how to consider race-conscious admissions in pursuit of diversity, the Justice Department and Department of Education provided guidance. A school “should consider whether it can meet its compelling interest in diversity by using race-neutral approaches,” the guidance states.

In cases where race is taken into account, it “cannot be given so much weight that applicants are defined primarily by their race and are largely accepted or rejected on that basis.”

Bill Jacobs, chairman of the systemwide Academic Senate and former head of UC’s Board of Admissions and Relations with Schools, said that “by and large, we’ve been putting all those practices in place.”

According to the university, the percentage of first-generation undergraduate students rose to 42 percent in 2013 from 34 percent 10 years earlier. And more than 40 percent of the system’s undergraduates are from low-income families.