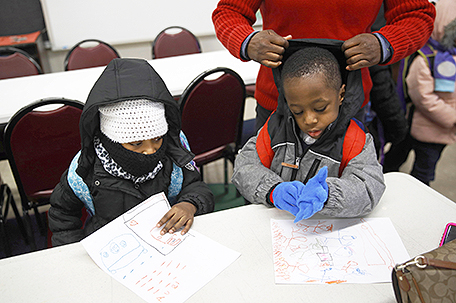 ABOVE PHOTO:  Teacher Loraine Wilson, top right, helps bundle up pre-kindergarten students as they wait to be picked up at the end of a school day at Lakewood Elementary School in Baltimore. The recent spell of cold weather exposed the poor state of school buildings in many big-city East Coast districts, including Baltimore. Lakewood students were sent back home Monday morning after pipes burst just as buses began dropping youngsters off. The school was able to reopen for classes Tuesday. (AP Photo/Patrick Semansky)

By David McFadden and Carolyn Thompson

BALTIMORE — The recent spell of cold weather exposed the poor state of school buildings in many big-city districts, including Baltimore, where the failure of heating systems closed dozens of institutions after children were left shivering in frigid classrooms.

Schools were challenged in other cities affected by the cold snap, including Philadelphia and Bridgeport , Connecticut’s largest city, as pipes burst, heating units froze and other pieces of decades-old infrastructure gave out under the strain of record-breaking cold.

It’s no wonder; investment in school construction and maintenance has been falling steadily since the recession, according to an analysis by The Associated Press.

Experts who have been sounding alarms about the state of many public school buildings say the problems that struck last week are a direct result of years of inadequate funding for basic upkeep. The need is especially great in urban centers where older buildings serve poorer children and maintenance is often put off until it becomes an exponentially more costly emergency repair, said Mary Filardo, executive director of the nonprofit 21st Century School Fund, which advocates for better facilities.

“The systems are vulnerable because they’re old and they’re well beyond their useful life, and so they fail,” Filardo said.

In Baltimore, six schools were still closed early this week, down from 60 at the height of the district’s heating crisis. Images circulated on social media last week of Baltimore students bundled up in winter jackets in their classrooms and rubbing their hands together for warmth.

At Lakewood Elementary School, a 1960s-era building in an East Baltimore neighborhood marred by derelict row homes, children were sent back home Monday after pipes burst just as buses began dropping youngsters off. The school reopened for classes Tuesday.

As Sasha Harmon, 29, picked up her son at the school Tuesday, she expressed outrage that more has not been done to stop the deterioration of the city’s schools.

“This problem is not new. I remember being a little kid and wearing my winter jacket in class because the heating was screwed up,” Harmon said. “Baltimore needs to do a lot better for our children. It is ridiculous things like this just keep happening.”

Roughly half of the city’s 171 schools experienced heating problems during an “unprecedented challenge” amid days of frigid weather, said Sonja Brookins Santelises, who leads Baltimore City Public Schools. She praised city workers and private contractors who tried to get on top of the problem but said “decades of mess-up” led up to the latest troubles.

As in other districts around the country, Baltimore has seen spending on infrastructure fall in recent years.

Nationwide, spending on construction and maintenance of school facilities, including staff salaries and benefits, peaked in the 2008-2009 school year at an inflation-adjusted $132 billion, according to the AP analysis of federal data on school spending. That spending fell to $102 billion in 2013-2014, the most recent year for which data are available.

The American Society of Civil Engineers gave public school buildings an overall grade of D+ in its 2017 report card, finding that about one in four of the country’s nearly 100,000 school buildings are in fair or poor condition and a funding gap of $38 billion between what schools are and should be spending to renew facilities.

At Fairborn City Schools near Dayton, Ohio, water lines burst as temperatures plummeted and heating units stopped working last week in two schools built in the 1950s. In one, the heating system was so old that contractors trying to make emergency repairs had to take parts from an old, now-unused heating system in another district school that has a newer system installed, Superintendent Mark North said.

“You know, these things are antiques,” North said.

In another school, the heating problems seemed to cascade, with one unit failing each time another was fixed, North said. The issues required $30,000 in repairs and canceled classes for two days as the heat was restored, the water mopped up, books and furniture were moved and tile was replaced.

A debate over who is to blame for the crisis in Baltimore is underway.

Baltimore’s district has suffered under “woeful mismanagement,” said Maryland Gov. Larry Hogan, who announced $2.5 million in emergency funding Monday. Hogan, a Republican who is running for a second term, said he plans to submit legislation creating a new investigator general’s office to address mismanagement and a lack of accountability by local school districts.

“When it comes to the problems in our local school systems, it is not a funding issue,” Hogan said. “It’s an accountability and management and competency issue.”

Local education officials did not directly respond to Hogan’s criticisms when contacted by the AP.

There has been “a woeful lack of attention over many years” to infrastructure problems plaguing public schools, and many are not fit for children, said Democratic Mayor Catherine Pugh. Her administration launched a $1 billion initiative last year to close some Baltimore schools, modernize others and construct new school buildings.

Meanwhile, a crowdfunding campaign spearheaded last week by a Coppin State University student aims to buy hundreds of space heaters and warm clothes for students trying to stay warm in Baltimore’s public schools. It had raised over $78,000 by Tuesday morning, well over its $20,000 goal.