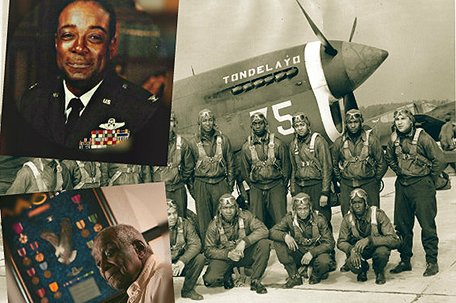 HIGHLAND, Calif.–Col. Paul L. Green, one of the Tuskegee Airmen, the legendary black pilots who escorted U.S. aircraft during World War II, has died in a Southern California senior care home. He was 91.

Green died Monday morning at Brightwater Senior Living with Angel Green, his wife of 68 years, at his side, Jennifer Lee, the home’s executive director, told the Riverside Press-Enterprise .

The Lees had lived in Highland, a San Bernardino community east of Los Angeles, since 1976. But they moved into Brightwater just over a week ago.

Green grew up an orphan in Xenia, Ohio. He spent part of his youth in the Ohio Soldiers and Sailors Orphans Home. While flying kites there, he would often see planes going overhead from a nearby air base. “I thought it would be a great thing if I could be one of those guys flying a plane,’’ he told the Press-Enterprise in 1999.

Green got his chance after he was drafted into the Army and sent to Tuskegee, Alabama, for pilot training. Green flew 25 combat missions with the 99th Fighter Squadron in Italy, escorting bombers.

The Tuskegee Airmen were considered an experiment at a time when African Americans faced discrimination both within and without the military. They took part in about 1,500 combat missions and earned 96 Distinguished Flying Crosses, according to a January article on the website of the Air Force Historical Research Agency.

“Once you achieve something, you make it easier for everyone,’’ Green said in 2009. “We proved we were not a bunch of dummies; that we could fly airplanes and we were capable of doing whatever everyone else does. Just the color of our skin was different.’’

After the war, Green joined the Air Force, later served in Vietnam and near the end of a 30-year military career became commander of Norton Air Force Base in San Bernardino.