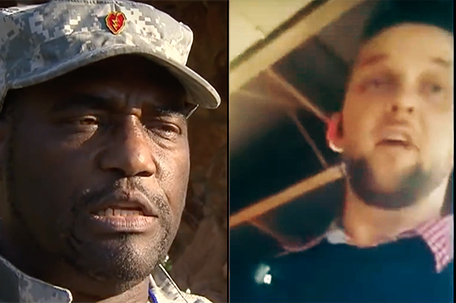 CEDAR HILL, Texas — The parent company of Chili’s says it wants to make things right after a veteran had his free meal taken away on Veterans Day.

Ernest Walker posted a video to Facebook on Friday of a manager taking away his meal at a Chili’s in the Dallas suburb of Cedar Hill. The Army vet writes that the meal was taken away after another diner raised questions about the uniform Walker was wearing. Walker says the manager took his meal even after he showed him his military ID and discharge papers.

He recorded the interaction as a Chili’s manager in Cedar Hill questioned his service and took away his free burger.

U.S. Army Veteran Ernest Walker says he was 16 and homeless when he enlisted, and the military changed his life. He feels disrespected and wants the company to validate his service.

Walker says he and his service dog, Barack, went into Chili’s in Cedar Hill for a free burger on Veteran’s Day. He says his military service was questioned, and then this happened…

Manager: “I’m so sorry. You didn’t provide any documents to me.”

Walker: “Yes, I did provide documents to you.”

Walker says a manager at the Chili’s snatched his to-go box, saying Walker could not prove he is a veteran.

But Walker says he showed him his DD214 and his driver’s license, which he also showed FOX 4 Sunday.

He believes it was another customer, an elderly white man, also a veteran, who doubted him.

“He said, ‘Well, I was in World War II in Germany and they didn’t have any Blacks over there then.’ He’s an older guy so I let that stuff go,” said Walker.

Moments later was the confrontation with the manager.

“He says that we have guests that say you are not a legitimate military veteran,” said Walker.

Walker says the man who approached him first was wearing a Donald Trump campaign sticker. He feels it is no coincidence it happened days after Trump’s election.

“I believe if it wasn’t for the temperature of America right now, I believe that man would have never reacted that way, because I think he’s probably a good person,” said Walker.

Walker says he bought the fatigues he was wearing after he was discharged as a tribute to his service.

Walker’s lawyer was set to meet with the company Monday.

Fox 4 Dallas-Fort Worth contributed to this article.

However, on Nov. 11, one of our restaurants failed to live up to our expectations and in doing so, we let down a valued Guest. Last week, Mr. Walker, a veteran, came into our restaurant to participate in our Chili’s program honoring veterans and active military with a free meal. Unfortunately, Mr. Walker was not treated in a manner our veterans deserve. On a day where we served more than 200,000 free meals as a small gesture of our appreciation for our veterans and active military for their service, we fell short.

Today, we personally apologized to Mr. Walker for the unfortunate experience in our restaurant on Veterans Day and thanked him for his service to our country. We also thanked him for taking the time to speak with us and he appreciated our apology. We took swift action and immediately removed our manager from the restaurant. We are now in the process of working with Mr. Walker on a resolution that promotes trust and healing.

We are committed to making this right because this is not representative of what Chili’s stands for, where every day, in every restaurant, we connect, serve and give to create the best life.

On behalf of our Team Members, I want to thank you for listening, acknowledging our apology and we look forward to making you feel special in our restaurants.