Chief in charge of intel before Capitol riot returns to post 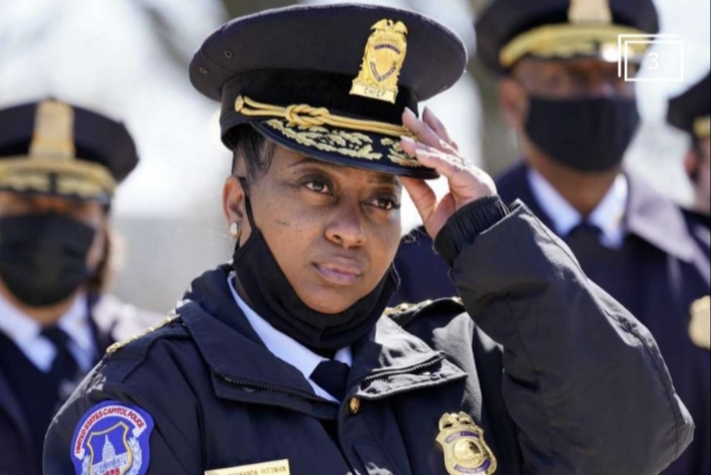 FILE: Capitol Police Yogananda Pittman listens during a news conference after a car crashed into a barrier on Capitol Hill near the Senate side of the U.S. Capitol in Washington is  (AP Photo/Alex Brandon, File)

By MICHAEL BALSAMO and ERIC TUCKER

WASHINGTON (AP) — Yogananda Pittman, the Capitol Police official who led intelligence operations for the agency when thousands of Donald Trump loyalists descended on the building last January, is back in charge of intelligence as officials prepare for what’s expected to be a massive rally at the Capitol to support those who took part in the insurrection.

Pittman — elevated to acting chief after then-Chief Steven Sund was forced to resign in the aftermath of the deadly insurrection — was passed over last month for the role of permanent chief. The Capitol Police Board, which oversees the force, instead picked J. Thomas Manger, the former chief of the police departments in Fairfax County, Virginia and Montgomery County, Maryland.

Pittman’s tenure as assistant chief was marred by a vote of no-confidence from rank-and-file officers on the force and questions about intelligence and leadership failures — specifically, why the agency wasn’t prepared to fend off a mob of insurrectionists, even though officials had compiled intelligence showing white supremacists and other extremists were likely to assemble in Washington on Jan. 6 and that violent disruptions were possible.ADVERTISEMENT

“Supporters of the current president see Jan. 6, 2021, as the last opportunity to overturn the results of the presidential election,” said a Jan. 3 Capitol Police intelligence assessment. “This sense of desperation and disappointment may lead to more of an incentive to become violent.”

Unlike past events, when pro-Trump supporters clashed violently with counterdemonstrators, “Congress itself is the target on the 6th,” the assessment added.

The deadly riot at the Capitol quickly overwhelmed the police force and has resulted in hundreds of federal criminal prosecutions and internal reviews about why law enforcement agencies weren’t better prepared.

Now, months later, Pittman has been put back in charge as assistant chief of the agency’s intelligence operations and will be supervising officers who protect top congressional leaders.

Police officials in Washington are increasingly concerned about a rally planned for Sept. 18 on federal land next to the Capitol that organizers have said is meant to demand “justice” for the hundreds of people already charged in connection with January’s insurrection.ADVERTISEMENT

Organizers of the event, known as “Justice for J6,” have said it will be peaceful but law enforcement officials fear such a gathering with thousands of people could devolve quickly into violence.

That Pittman remains in a position overseeing intelligence is notable given the internal leadership upheaval that followed the riot — Sund, the House and Senate sergeants at arms and the only other assistant police chief all resigned after January’s attack. On the other hand, removing her from the job could also represent a concession by the department that there was an intelligence failure on its part.

Capitol Police officials say Pittman was “given the additional responsibility” of being the acting police chief on a temporary basis and never left her old job, though an organization chart obtained by The Associated Press shows that the position of assistant chief overseeing intelligence was held by a different official, Sean Gallagher. He is now temporarily in charge of the department’s uniformed officers.

“In that temporary position, Chief Pittman led the Department through numerous reviews. She also directed and led improvements to pivot the USCP towards an intelligence based protective agency,” the agency said of Pittman’s time as police chief.

As the temporary public face of the department, Pittman conceded to Congress at a February hearing that multiple levels of failures allowed rioters to storm the building. But she disputed the notion that law enforcement had failed to take the threat seriously, noting how Capitol Police several days before the riot had distributed an internal document warning that extremists were poised for violence.

The police department had compiled numerous intelligence documents suggesting the crowd could turn violent and even target Congress.

The Associated Press has obtained full versions of four separate Capitol Police intelligence assessments in December and January that warned crowds could number in the tens of thousands and include members of extremist groups like the Proud Boys.

A Jan. 3 memo, for instance, warned of a “significantly dangerous situation for law enforcement and the general public alike.”

But none of the assessments envisioned the deadly violence that actually happened when huge crowds of Trump loyalists overran the building as Congress was gathered to certify the results of the presidential election. Police officials have repeatedly said they had no intelligence to suggest that would happen.

Arguably the most detailed Capitol Police document was a Dec. 21 intelligence assessment that showed how people had been researching and discussing the tunnels under the Capitol — typically used by members of Congress and staff — on public websites. A Jan. 5 FBI memo from its Norfolk field office contained a similarly ominous warning.

Pittman told congressional officials that she had distributed that Dec. 21 assessment to her command staff, including the chief, the other assistant chief and deputy chiefs, but one recently retired deputy chief, Jeffrey Pickett, told AP that he had not received the document and was unaware of other senior officials who had.

In a statement, Capitol Police officials said the department had “enhanced its security posture” because of the intelligence “indicating increased interest in the tunnels.” A law enforcement official told the AP that Pittman had emailed Sund and the other assistant chief, Chad Thomas, about the tunnel information. The department did not say whether Pittman sent the actual intelligence assessment to other chiefs, as she testified.

“What the intelligence didn’t reveal was the large-scale demonstration would become a large-scale attack on the Capitol Building as there was no specific, credible intelligence about such an attack,” the department said in a statement.