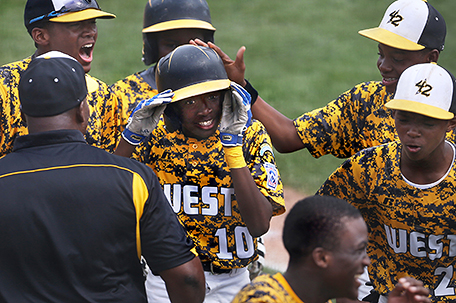 CHICAGO– Little League International has stripped Jackie Robinson West of the national title that the Chicago team won last summer after an investigation revealed it had falsified boundaries to field ineligible players.

In a stunning Wednesday announcement that came months after the all-black team, whose ages ranged from 11 to 13 years, captured the attention of the country and the hearts of its hometown, the baseball organization said it also found that after the league had changed the boundaries, some team officials went to surrounding leagues to convince them to go along with what they’d done.

“This is a heartbreaking decision,’’ Stephen D. Keener, the Little League International president and CEO, said in a statement.

“As painful as it is, we feel it is a necessary decision to maintain the integrity of the Little League program. No team can be allowed to attempt to strengthen its team by putting players on their roster that live outside their boundaries.’’

The team has been suspended from Little League tournament privileges until new leadership is found. The team’s manager, Darold Butler, is also suspended, and an administrator from the district that includes Jackie Robinson West has been removed from his position, according to the statement.

Philadelphia’s Taney Dragons, who played against Jackie Robinson West last year in the Little League World Series and was defeated by them issued this statement regarding the investigation:

“Over the course of the Little League World Series, Taney Little League players, along with so many of the players from the other 14 teams, developed a great and lasting friendship with the Jackie Robinson West kids. The camaraderie that formed over the course of the tournament among all of the teams was, and continues to be, the most memorable outcome of the entire LLWS experience.

The decision by Little League International will in no way affect the level of respect that we have for the JRW players. On the field, they competed with discipline and class, and played the game the right way. Off the field, they carried themselves as gentleman and represented their city and families well. They should be proud of their accomplishments.

We thank Little League for the incredible lessons, friendships, and lifelong memories that our players gained from the LLWS experience.”

The march of the team riveted the city, all the way to its loss in the world championship game to South Korea, and when it was over, thousands of people lined Chicago’s streets to catch a glimpse of the boys as they were paraded by bus from their South Side baseball field to a downtown park. There were countless heartwarming stories about the team, including an effort by major league players to contribute money so the parents in the blue collar community could attend the World Series in Williamsport, Pennsylvania, and another about Cubs players huddled around a television watching the team during a rain delay at Wrigley Field. The team was treated to a trip to the major league World Series and to the White House to meet President Barack Obama and the first lady, Michelle Obama.

League officials did not immediately return calls for comment. Throughout the investigation, the team has maintained that no cheating occurred.