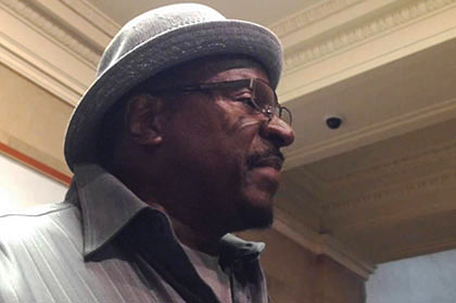 ABOVE PHOTO:  Anthony Holmes, above, said, “I still have nightmares” from being one of 57 black men now being paid reparations for being tortured in jail by Chicago police.

CHICAGO– The City of Chicago in January began paying $5.5 million in reparations to 57 black men who were tortured into confessing to crimes they didn’t commit by now-disgraced former Chicago Police Department Commander Jon Burge and his notorious “midnight crew.”

Their violent interactions with Chicago’s black community were condoned or overlooked by some top city officials, including the highest ranking African-American members of the police department.

Each of the torture victims received $100,000 minus any payments some of them may have received from previous financial settlements with the city, said G. Flint Taylor, co-founder of Chicago Torture Justice Memorials, which negotiated the historic agreement with the city last May, after decades of trying to get members of Chicago City Council to acknowledge there was a problem. He added that five or six men had previously received payments after being tortured by Burge and his crew.

The reparations package includes erecting a memorial to torture victims, a public apology, job training and teaching school children about Burge, free college tuition for the families of torture victims, many of whom are now senior citizens and psychiatric help for the victims who suffer from post traumatic stress disorder.

“This holistic model should serve as a blueprint for cities around the country, from Ferguson to Baltimore, which can respond to systemic racist police brutality,” said Joey Mogul, also a co-founder of Chicago Torture Justice Memorials (CTJM) and a partner in the People’s Law Office.

Mogul drafted the original reparations ordinance, which was written to provide redress to approximately 125 black people tortured by Burge from 1972 through 1991. The ordinance was inspired by attorney Standish Willis and Black People Against Police Torture.

The payments, issued by the City of Chicago, cover torture inflicted on the men by Burge and his band of violent police officers from 1972 through 1991, not for the time the men spent in prison after being wrongfully convicted based on lies presented at trial by police, Taylor told Blackmansstreet.Today.

Once the men accepted reparations they were prohibited from seeking additional payments from the city. The payments are not tax free.

“What makes this remarkable is that it is an extrajudicial settlement that the city agreed to. The courts did not overturn their convictions,” said Taylor, a partner in People’s Law Office.

What Burge did was overlooked by some black cops.

Burge tortured 110 to 120 men between 1972 and 1991, using verbal abuse, electric shock, mock executions, suffocation and beatings. He had been double promoted from lieutenant to deputy commander, skipping the rank of captain, by Fred Rice, Chicago’s first African-American police superintendent.

Rice was followed by two other African-American police superintendents, LeRoy Martin and Terry Hillard, who both knew about Burge’s brutal tactics but did nothing to get rid of him, according to the Chicago Reader, a weekly newspaper, which broke the story about police torture. The police department finally fired Burge in 1993.

Darrell Cannon, a Burge torture victim who spent 24 years and five months in prison for a crime he didn’t commit, participated in the settlement. Police arrested him in 1983 and prosecutors dropped charges against him in 2004.

Through tears and cheers, Cannon testified at Chicago City Council, telling the audience how Burge’s men tortured him by applying an electric cattle prod to his genitals.

He urged members of City Council to pass the reparations ordinance. Cannon is one of the torture victims’ spokesman.

The Chicago City Council’s agreement to make the payments occurred before the expiration of the statute of limitations for police torture victims, Taylor said. Burge and his crew’s testimony sent 10 men to death row.

Those 10 men remained there until 2003, when Illinois Gov. George Ryan commuted their sentences. Ryan halted executions three years earlier after courts ruled that 13 men on death row had been wrongfully convicted.

The Reparations Ordinance was introduced in 2013 by Chicago Aldermen Proco Joe Moreno and Howard Brookins. Chicago’s Mayor Rahm Emanuel, who is under fire for his handling of the murder of Laquan McDonald by Chicago cop Jason Van Dyke, approved the reparations ordinance.

Van Dyke has been charged with McDonald’s murder. He was shot 16 times. Van Dyke also had 18 civilian complaints filed against him, including use of excessive force and racial slurs, Taylor said.

When the approval of the Reparations Ordinance was announced, 98 men applied for the money, said city officials. CTJM and Prof. Daniel T. Coyne, a law professor at Chicago-Kent College of Law, reviewed the claims. They were sent to Chicago’s Law Department. Claims that the law department did not approve were arbitrated by David Coar, a former U.S. District Court Judge.

Anthony Holmes, a Burge torture survivor, said in 2011 court testimony: “I can’t shake it. I still have nightmares, not as bad as they were, but I still them. I wake up in a cold sweat. I still fear that I am going back to jail for this again. I see myself falling in a deep hole and no one helping me to get out.”

The War Goes On

The war against police brutality is not over. CTJM noted the shooting deaths of Laquan McDonald, Bettie Jones and Quintonio LeGrier.

“Even more recently, the police killings of Bettie Jones and Quintonio LeGrier have created a renewed crisis in the city and intensification of the struggle,” reported CTJM.