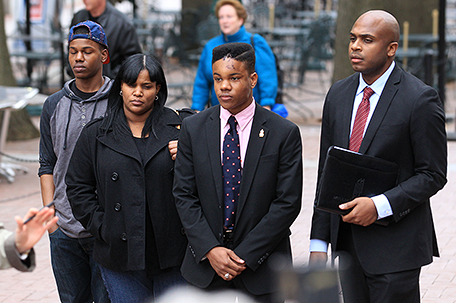 ABOVE PHOTO:  In this March 19, 2015 file photo, Lawyer Daniel Watkins, right, stands with UVa student Martese Johnson, center, his mother Dychea and his brother Michael, left, before making a statement at a news conference in Charlottesville, Va.  In a show of solidarity, supporters crowded into a courtroom April 16 as Johnson made his first court appearance after a bloody arrest outside a bar that sparked a police investigation. The case against Johnson was continued until May 28 so state police can finish their criminal investigation of the March 18 arrest by state Alcoholic Beverage Control police. Gov. Terry McAuliffe ordered the investigation after images and recordings of Johnson’s arrest, his faced bloodied, spread swiftly on social media.  (AP Photo/The Daily Progress, Andrew Shurtleff)

RICHMOND, Va. — Charges have been dropped against a University of Virginia student whose bloody arrest sparked a public uproar and a state police investigation, a prosecutor said Thursday.

Charlottesville Commonwealth’s Attorney David Chapman said he made the decision after reviewing results of the investigation into Martese Johnson’s arrest. But he said the findings do not warrant charges against the Virginia Alcoholic Beverage Control officers who arrested Johnson.

Chapman said in a written statement that “the interest of justice and the long term interest of the Charlottesville community are best served by using this case as an opportunity to engage ordinary citizens, law enforcement officers, and public officials in constructive dialogue concerning police and citizen relationships in a diverse community.”

Johnson’s attorney, Daniel P. Watkins, said in a telephone interview that his client was “overjoyed” when he learned he will not be prosecuted.

“It’s been our position all along that police lacked justification to arrest and detain Martese,” Watkins said. “It’s been stressful facing criminal prosecution. He’s glad to put this behind him.”

The 20-year-old student form Chicago was arrested outside a bar on March 18 and charged with public intoxication or swearing, and obstruction of justice without force. Chapman will ask a Charlottesville General District Court judge to dismiss those charges at a hearing Friday morning.

“Upon review of the evidence, the applicable principles of law and the best interest of the community, the Commonwealth reached a conclusion that the interest of justice is not served by further prosecution of the defendant in relation to the events of March 18,” Chapman wrote in a court filing.

Johnson’s arrest gained widespread attention, with photos and videos on social media showing him pinned to the ground, his face bloodied. Johnson, who is black, called the officers racist.

Gov. Terry McAuliffe ordered the state police investigation and retraining for the liquor agency’s approximately 130 law enforcement officers. He also established a task force to review ABC practices and make recommendations by Nov. 1. Among the issues being considered by the panel is whether ABC should be stripped of its arrest powers.

About 500 students demanded answers about the arrest and ABC tactics from law enforcement officials during a forum at U.Va. two days after the incident. Dissatisfied with responses that they considered too broad, representatives of a black students’ organization shouted in unison, “Answer the question we asked.” They marched out before the event was over with their fists raised, chanting “Black lives matter.”

Johnson’s arrest came two years after another U.Va. student was arrested outside a supermarket by ABC agents who mistook a carton of sparkling water for beer. Several undercover agents swarmed Elizabeth Daly’s vehicle, one pulling a gun and another trying to break her windshield with a flashlight. The incident sparked a public backlash, and the traumatized student later settled a lawsuit for $212,500.

State police investigated that as well. The report was never made public, but ABC responded by promising several policy changes, including requiring agents to wear uniforms.

Watkins said he has not seen the state police report on his client’s arrest. Chapman said a public meeting will be held Wednesday to discuss the incident.