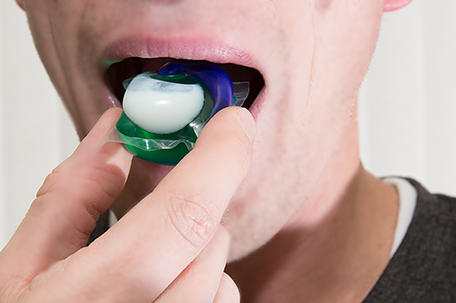 The American Association of Poison Control Centers warned last week that it had seen a spike in teenagers eating the detergent pods, which it says can cause seizures, respiratory arrest and even death.

CEO David Taylor called the trend “dangerous” and “extremely concerning” in a blog post Monday. He said the company is working with social media companies to remove videos of people biting into the detergent, and asked adults to speak with children about the hazards.

“Let them know that their life and health matter more than clicks, views and likes,” Taylor said.

P&G has faced safety issues with Tide Pods before. Shortly after it introduced the product in 2012, the company announced that it would create a double-latch lid to deter young children from accessing and eating the detergent packets. Some children mistook the brightly colored 1-inch pods for candy.

To deter teenagers, P&G released a 20-seond video of football player Rob Gronkowski earlier this month telling viewers not to ingest the pods.

“What the heck is going on people?” he said in the video. “Use Tide Pods for washing, not eating.”

A New York City pizzeria even launched “Pied Pods” because of the trend, offering rolls stuffed with cheese and pepperoni and topped with dyed cheese made to look like a detergent pod.