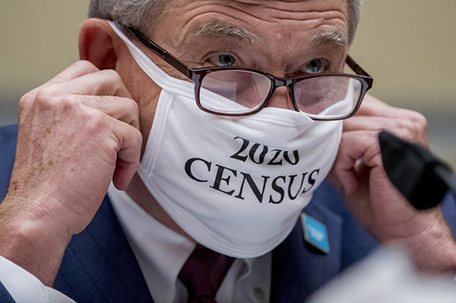 ABOVE PHOTO: Census Bureau Director Steven Dillingham wears a mask with the words “2020 Census” as he arrives to testify before a House Committee on Oversight and Reform hearing on the 2020 Census​ on Capitol Hill, Wednesday, July 29, 2020, in Washington. (AP Photo/Andrew Harnik)

ORLANDO, Fla. — House Democrats on Wednesday threatened to subpoena top officials at the U.S. Census Bureau after they refused to give interviews to an oversight committee over why the 2020 head count of every U.S. resident was cut short by a month and will stop at the end of September.

U.S. Rep. Carolyn Maloney, chair of the House Committee on Oversight and Reform, said in a letter to Census Bureau director Steven Dillingham that she would use “compulsory measures” to get the eight officials to appear if they didn’t agree to show up for interviews voluntarily.

Maloney, a Democrat from New York, had requested that interviews take place in August with top bureau officials, including two recent hires for newly created positions whose appointments critics say were part of the Trump administration’s efforts to politicize the agency. Democrats on the oversight committee have asked Commerce Secretary Wilbur Ross to withdraw the appointments of Nathaniel Cogley and Adam Korzeniewski.

The committee also wanted to ask Census Bureau officials about President Donald Trump’s order seeking to exclude people in the U.S. illegally from the process of redrawing congressional districts. Civil rights groups have filed multiple lawsuits challenging the memorandum as unconstitutional and an attempt to limit the power of Latinos and immigrants of color.

“The Committee is seeking interviews with Census Bureau staff to understand these current — and ongoing — efforts to change timelines and methodologies midstream, and what impact these changes will have on the accuracy, objectivity, and completeness of the Census,” Maloney said.

Dillingham said in a letter last week that interviews with senior staff during a critical time for the census would be “disruptive.” Widespread door-knocking at the homes of residents who haven’t yet responded to the census started this week. The revised plan will fulfill the bureau’s mission, he said.

“The plan is thoughtfully designed to deliver a complete and accurate census, including reaching hard-to-count communities,” Dillingham said.