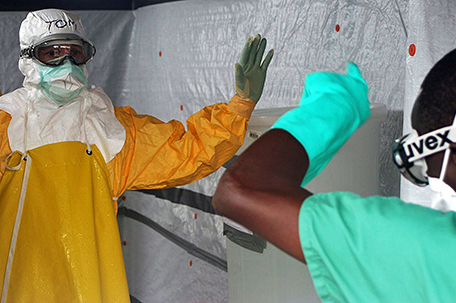 Officials have been scrambling to come up with new advice for protective gear since two Dallas nurses became infected while caring for the first person diagnosed with the virus in the United States.

The new guidelines set a firmer standard, calling for full-body garb and hoods that protect worker’s necks; setting rigorous rules for removal of equipment and disinfection of gloved hands; and calling for a “site manager” to supervise the putting on and taking off of equipment.

They also say health workers who may be involved in an Ebola patient’s care should repeatedly practice and demonstrate proficiency in donning and removing gear — before ever being allowed near a patient.

And they ask hospitals to establish designated areas for putting on and taking off equipment, whether it’s a room adjacent to an Ebola patient’s room or a hallway area cordoned off with a plastic sheet.

Nurses’ groups and other hospital workers had pressed the Centers for Disease Control and Prevention for the new guidance, saying the old advice was confusing and inadequate, and workers felt unprepared.

It’s not clear exactly how or when the two nurses at Texas Health Presbyterian Hospital became infected. Hospital officials have said they were following CDC guidance while caring for Thomas Eric Duncan.

“The bottom line is the guidelines didn’t work for that hospital,” said CDC director, Dr. Tom Frieden, in announcing the revision.

He said the latest advice offers an “extra margin of safety” and is better suited to U.S. hospitals where more high-risk procedures may be used. Earlier CDC guidelines had been based on treatment of Ebola patients in Africa, which sometimes has occurred in medical tents. That advice also allowed hospitals some flexibility with wearing protective garb when dealing with a suspected — not confirmed — case of Ebola.

The CDC cannot require hospitals to follow the guidance; it’s merely official advice. But these are the rules hospitals are following as they face the possibility of encountering patients with a deadly infectious disease that a few months ago had never been seen in this country.

Duncan was the first person diagnosed with Ebola in the U.S. The Liberian came down with Ebola symptoms last month, a few days after arriving in Dallas from West Africa.

Duncan went to the hospital on Sept. 25 but was not tested for, or diagnosed with, Ebola. He was admitted a few days later, and died Oct. 8.

Duncan’s case led to the monitoring of about 50 people who came in contact with him before his second trip to the hospital, and dozens of health care workers who cared for him after his admission.

The 50 in the initial group have just passed a 21-day observation period and no longer are deemed at risk for coming down with the disease. Among them was Youngor Jallah, who spent the past three weeks confined to her small apartment with her children and boyfriend, fearing they had contracted the virus from Duncan, her mother’s fiance.

On Monday, Jallah beamed as she sent her children back to school with clearance from the Dallas County health department tucked into their backpacks. Her mother emerged from her own confinement and started looking for a new place to live.

“We were sitting here traumatized,” Jallah told The Associated Press on Monday. “We just thank God we never came down with the virus.”

There are now about 120 people in Texas being monitored for symptoms, with their wait period ending Nov. 7, said Dallas Mayor Mike Rawlings. In Ohio, about 140 people are being monitored because of contact or potential contact with nurse Amber Vinson, one of the infected nurses. She flew to Cleveland and back over the Columbus Day weekend.

Meanwhile, an American doctor who was being treated for Ebola in in Atlanta since early September was released from Emory University Hospital on Sunday. Hospital and health officials never released his name, in keeping with his family’s wish for privacy.

After Duncan was diagnosed with Ebola, Jallah’s mother, Louise Troh; Troh’s 13-year-old son; Duncan’s nephew, and a family friend were ordered by a Dallas court to stay inside the apartment among Duncan’s used linens. Five days later they were evacuated to a four-bedroom home in an isolated corner of a 13-acre gated property owned by the Roman Catholic Diocese of Dallas, southwest of downtown.

Except for a few plastic bins filled with personal documents, photographs, trophies and a Bible, the apartment was stripped down to the carpeting and the contents were incinerated.

The city of Dallas announced Monday it is coordinating with a local church and donors to provide Troh with money to pay for six months of housing. Once she chooses a location, nonprofits will assist the family with furniture, linens and other household items, the city said.

“We want to restore what’s lost but more than that, we want to give her a running start on her new life,” said Troh’s pastor, George Mason of Wilshire Baptist Church in Dallas.