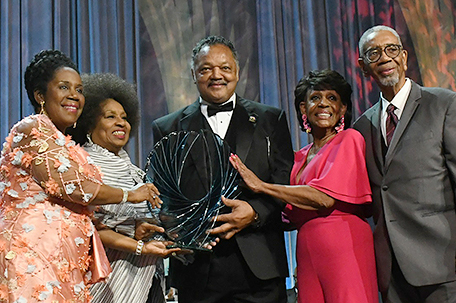 The Congressional Black Caucus Annual Legislative Conference concluded with the 48th Annual Phoenix Awards Saturday night. But before the night ended, the event felt more like a political revival meeting where the titans of Black America challenged to pick up the baton of service and sacrifice.

“So this is not the time for us to not know who we are,” preached the Rev. William Barber, co-chair of the Poor People’s Campaign, in his keynote speech to the applauding audience of thousands. “James Baldwin said it like this: We made the world and we are the ones who are going to have to make it over. We don’t belong to a people who shrink back when times get tough. America needs a conscious. We need it in the streets. We need it in the Congress. We need it at the ballot box!”

The dinner, themed “The Dream Demands,” was hosted by actress /producer Vivica A. Fox and actor/activist Lamman Rucker who narrated the program that honored Civil Rights veterans, the icons of Black America and the new members of Congress who are people of color.

The glitzy, black-tie event, held at the Walter E. Washington Convention Center, is the political equivalent to the Oscars with the political, civic and social stars of the Black community. But the dinner was transformed into church with Rev. Barber’s speech, titled “Knowing Who We Are In Times Like These.”

Barber began with advice on Black America’s response to President Donald Trump. He said, “Whatever Donald Trump’s mental status, don’t just focus on him. America has never had the ability to talk about racism and White supremacy.”

Reflecting on Dr. Martin Luther King’s April 3, 1968 “I Have Been to the Mountain Top” speech that took place in Memphis on the eve of the assassination, Barber said many people focus on the hoop and not the “gravy,” in what King said. “Dr. King looked at the sickness of our society and he said nothing would be more tragic than to turn back now.”

Speaking of Dellums, Rep. Barbara Lee (D-Calif.) told the gathering, “Ron embodied service. He was a former Marine, a psychiatric social worker. He loved the CBC with all of his heart.”

Aretha Franklin received the John R. Lewis Award of Courage for setting the highest standard of dedication, ability and creativity. Rep. John Lewis (D-Ga.) and Rep. Brenda Lawrence (D-Mi.) honored Franklin and the niece and nephew of the Queen of Soul accepted the award on her behalf. Lewis said “Aretha Franklin was one of a kind, without her the Civil Rights Movement would have been a bird without wings.”

During the Jackson presentation, Rep. Maxine Waters (D-Calif.) said “I don’t care how many times we have done it before, we are going to honor him again and again because he deserves it.”

Rep. Sheila Jackson, chair of the Congressional Black Caucus Foundation, said “For me, Rev. Jackson and Sister Jackson are American and international heroes.”

Rep. Bobby Rush said, “Thank you Rev. Jackson for saving my life.” Rush added that had it not been for Jackson running for President in 1984 and 1988, there would not have been a Chicago Mayor Harold Washington nor a President Barack Obama.

Jackson told the audience “Our best days are ahead,” and “Let nothing break your spirit.” Mrs. Jackson offered practical advice that included, “Leave room in your life for God to manage all of your shortcomings.”

At the end of his speech, Barber responded to the oft-heard use of the word, “socialism” in describing the beliefs of politicians and civil rights leaders who believe in helping the poor.

He said, “If caring for people is socialism than the constitution is a socialist document…Jesus was a socialist…If caring for people is socialism then bailing out businesses is wreckless social behavior. We must be the conscious of this nation otherwise the soul of this nation will be fatally wounded…Our vision must be bigger than Trump, our vision must be to save this nation.”