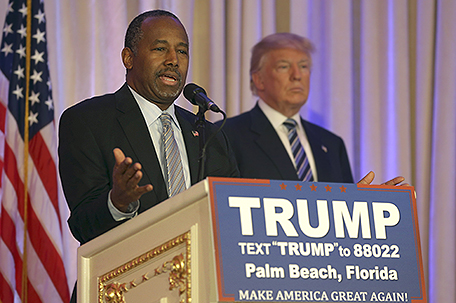 Dr. Ben Carson’s endorsement of Donald Trump as the Republican nominee for president may cause only a few ripples among Black voters in this year’s election but it could harm the GOP’s ongoing minority outreach, political analysts say.

“I don’t think it will have any impact on drawing Black votes for Donald Trump,” said Andra Gillespie, associate professor of political science and director of the James Weldon Johnson Institute at Emory University. “There’s nothing in Trump’s campaign that’s going to be attractive to rank-and-file Black voters. His racist, xenophobic, misogynistic language has undercut any support he may have gained among minorities.”

Trump’s controversial statements may also undercut any traction the GOP has made in drawing more minorities under the party’s tent, political analysts say. The fact that the only African-American candidate in the race has thrown his support behind such a divisive character does not help.

“Marco Rubio represented the wing of the Republican Party that was trying to reach out to Black voters and that is diametrically opposed to what Donald Trump is doing,” Gillespie said.

Carson suspended his campaign earlier this month and endorsed Trump shortly after—despite the billionaire’s comparison of the retired pediatric neurosurgeon to a child molester, among other insults.

“His decision probably had to do with his looking at who was left in the field and deciding Trump would probably win the nomination. He probably figured (John) Kasich and (Marco) Rubio would not be viable candidates,” Gillespie said. She added, “On the surface, Ted Cruz and Ben Carson have a lot in common—they both come from evangelical backgrounds and both strongly believe in upholding the Constitution.

But if you look at how Cruz’s campaign treated Carson—for example, them telling voters in Iowa that he had suspended his campaign when he hadn’t—he probably felt that was worse than Trump’s insults.”

In a recent interview with Newsmax TV’s Steve Malzberg, Dr. Carson confirmed his endorsement was for “practical” reasons.

“The reason that I’m choosing Trump is because I’m a big picture guy and I recognize he’s bringing in a lot of people who were not interested in coming in before—a lot of those people who were coming in with me as well,” he said.

Plus, the GOP frontrunner would likely not be stopped by one of his preferrred candidates, he added.

“I didn’t see a path for (John) Kasich, who I like, or for (Marco) Rubio, who I like. As far as Cruz is concerned, I don’t think that he’s going to be able to draw Independents and Democrats unless he has some kind of miraculous change,” Carson said. “Is there another scenario I would have preferred? Yes. But that scenario is not available.”

The half-hearted endorsement continued with Carson saying that “even if Donald Trump turns out not to be such a great president… we’re only looking at four years.”

In those potential four years, Carson said he likely would serve in an “advisory capacity” to a Trump White House.

“We haven’t hammered out all the details but it is very important that we work together in this country,” he said. “Again, I’m not going to reveal any details about it right now because all of this is still very liquid.”

The Afro American contributed to this article