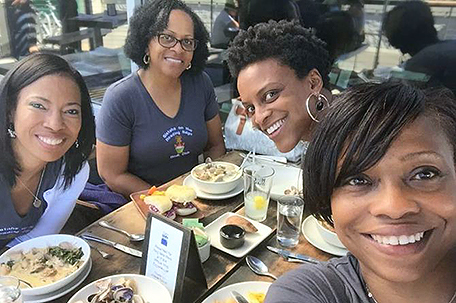 ABOVE PHOTO:  Members of Sisters on the Reading Edge book club during the Napa Valley Wine Train trip.  (Photo: Facebook)

SAN FRANCISCO — The Napa Valley Wine Train issued an apology Tuesday to a book club that includes mostly black women who said they were booted from a tasting tour because of their race.

The company also promised additional training for employees on cultural diversity and sensitivity, and they offered the group free passes for 50 people for a future trip.

“The Napa Valley Wine Train was 100 percent wrong in its handling of this issue,” CEO Anthony “Tony” Giaccio said in a statement. “We accept full responsibility for our failures and for the chain of events that led to this regrettable treatment of our guests.”

The 11 members of the Sisters on the Reading Edge book club, all but one of whom is African American, say the Napa Valley Wine Train ordered them off Saturday, mid-journey. As debate built Monday on social media under the hashtag #laughingwhileblack, wine train spokesman Sam Singer said train employees had asked the women to either quiet down or get off the wine train and accept a free bus ride back to their starting point. One member of the group is 83.

“We didn’t do anything wrong,” said Johnson, who chronicled the episode via cellphone videos. On Facebook, Twitter and Yelp on Monday, defenders of the women posted videos of other, past noisy groups celebrating on the wine train, and they debated the wine train’s action with its supporters.

“We still feel this is about race. We were singled out,” Johnson told KTVU.

Wine-train employees marched the book club members through six railroad cars before escorting them off the train, the women said.

“You can apologize, but you can’t take away the experience we had,” Lisa Johnson, an Antioch, California, author who has organized the group’s outings to wine country for the last 17 years, told the Oakland Tribune. “We were still marched down the aisle of the train car to waiting police officers. I’m still traumatized by the whole experience.”

Wine train employees had called the police to deal with what they reported were “11 disruptive females,” Gonzalez said.

Police arrived at the railway siding and found “there was no crime being committed … nobody was intoxicated, there were no issues.” So officers left, Gonzalez said.

In the past, she said, the town’s police had responded to wine-train calls to offload passengers because of domestic incidents on board or for fighting.

The Washington Post reported by Monday evening, the Napa Valley Wine Train’s Yelp page had been buried in negative reviews. One woman who said she was on the same train as the Reading Edge book club, wrote that she “watched in disbelief” as the women were escorted off.

“I’d like to think it wasn’t a racially motivated act, but given the fact that other, non-black guests were behaving in the same way and not removed, I can only conclude that it was discrimination,” she wrote. “This business belongs in the ‘what is wrong with our country’ category.”

Giaccio said he had a conversation with Johnson, a leader of the Sistahs on the Reading Edge Book Club, and offered the group the free passes for a reserved car “where you can enjoy yourselves as loudly as you desire.”

“We were insensitive when we asked you to depart our train by marching you down the aisle past all the other passengers,” he said in his letter. “While that was the safest route for disembarking, it showed a lack of sensitivity on our part.”