Bucks player ‘gave in’ during arrest to avoid officers’ guns 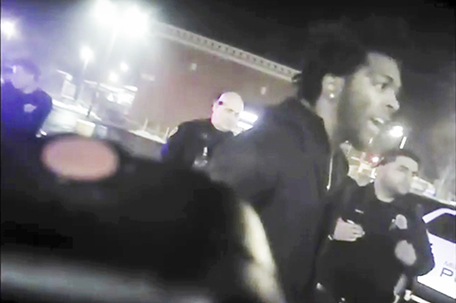 ABOVE PHOTO:  This Jan. 26, 2018 police body-camera footage released by Milwaukee Police Department shows NBA Bucks guard Sterling Brown as he talks to arresting police officers after being shot by a stun gun in a Walgreens parking lot in Milwaukee. The release comes as city officials who’ve viewed the videos have expressed concern about how officers conducted themselves. Even leaders of the police department have hinted the video may make them look bad. (Milwaukee Police Department via AP)

MILWAUKEE — Milwaukee Bucks player Sterling Brown said Friday he “gave in” when police used a stun gun as they detained him for a parking violation because he didn’t want officers to “pull out their guns.”

“I was just being smart. I just wanted to get out of the situation and get home,” Brown told the Journal Sentinel. He said he still gets upset when he watches the video of his interaction with officers in the parking lot of a Walgreens on Jan. 26.

An officer had approached Brown because he was double-parked in a handicap spot and the interaction quickly escalated. The officer called for backup as the conversation with Brown became tense and a half-dozen squad cars responded.

Brown said he thought he and the first responding officer were simply “going to have a dialogue back and forth between two men” and didn’t expect the situation to escalate.

“I don’t see what I could have done different,” said Brown, whose father was a police officer in Maywood, Illinois, where the Bucks guard grew up. He said that before moving to Milwaukee his interactions with police had been for minor things, like traffic tickets.

“I’ve encountered polite, rude, everything. But things didn’t escalate in those situations,” he said.

At one point after backup arrived, Brown was surrounded by four officers. One of them asked him to take his hands out of his pockets and a scuffle immediately ensued. Within seconds, one officer yelled “Taser! Taser! Taser!” and Brown was on the ground groaning in pain.

The video was publicly released Wednesday.

Three officers involved in the arrest were disciplined, with suspensions ranging from two to 15 days. Eight others will undergo remedial training in professional communications.

Police Chief Alfonso Morales personally apologized to Brown last month when he went to the Bucks’ practice facility to show him the video.

“I get mad every time I watch it,” Brown said. “I was defenseless.”

Brown’s attorney did not grant an interview request from The Associated Press with his client.

Despite what happened, Brown said he doesn’t regret joining the Milwaukee Bucks.

“These incidents happen in every state, every county, every jurisdiction,” he said. “I’ve gotten a lot of love and support from Milwaukee.”