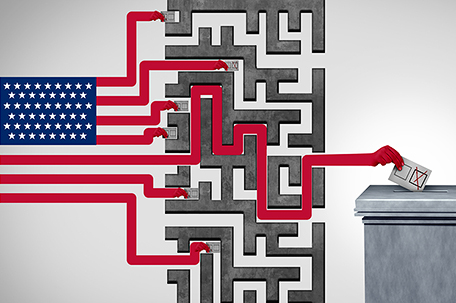 During National Voter Registration Month, BridgeTogether, an initiative led by American Bridge 21st Century co-chair Gov. Deval Patrick that was launched in 2021 to support relational organizing and sustained community engagement beyond Election Day, is announcing its final round of grant funding to organizations focused on activating and mobilizing voters in Pennsylvania as they scale up voter registration drives ahead of the state’s October 24 voter registration deadline.

Pennsylvania-based citizens engagement groups like BridgeTogether grantees Unity in the Community and Philadelphia Lawyers for Social Equity are organizing across the state in rural and historically disenfranchised communities to ensure every eligible Pennsylvanian can cast their ballot.

In collaboration with Black Voters Matter, BridgeTogether grantee Unity In The Community will hold a voter registration rally on October 9 at 2100 Lambert Street in Philadelphia. According to the organization’s executive director Anton Moore, the group is also set to host a series of pop-up voter registration clinics in high-traffic areas across the city to galvanize Black women and young Black males to vote. Unity in the Community received a $100,000 grant from BridgeTogether.

Under the leadership of Renee Chenault Fattah, The Philadelphia Lawyers for Social Equity has established pardon hub clinics and community events to make voter registration services accessible to over 100,000 previously incarcerated PA residents.

“We are proud to support Unity in the Community and Philadelphia Lawyers for Social Equity for their work in disenfranchised communities, “ said Tiffiany Vaughn, BridgeTogether’s communications director in a statement. Our democracy must be fully participatory and accessible to all citizens to ensure that every group, community, and voice is heard at the ballot box.

Collectively, BridgeTogether has invested over a million dollars in civic engagement groups across battleground states and has provided resources to overcome efforts to suppress the vote in disenfranchised communities in Pennsylvania, Georgia, Nevada, and Arizona.

For more information about the October 9 rally, visit: https://www.unityinthecommunity215.com/

Bridge Together announces funding for initiatives in key midterm battleground states, including Pennsylvania

Voter suppression wins another round in a Pennsylvania courtroom