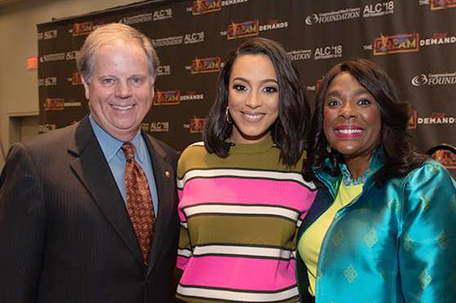 Black women have been the backbone of the Democratic Party for decades. In 2018, they’re reclaiming their time.

When Doug Jones became the first Democrat to represent Alabama in the United States Senate since the early 90s, there was a lot of talk from pundits around the country about the myriad of forces ranging from a weak Republican challenger to a Blue Wave that conspired to get him elected.

But while all of those things probably contributed to his victory, the one that stood out most was a number: 98 percent.

That was the percentage of Black women who canvassed, phone banked, and got voters to the polls to cast their votes for Jones.

At a panel held as part of the Congressional Black Caucus Foundation’s annual Legislative Conference, the women who helped Jones win his seat joined women vying for elected office, Democratic Party operatives and others served notice that the party’s most consistent voters have earned a long overdue seat at the table.

“It’s important that we as Black women are in our rightful place as the backbone and the conscience of the Democratic Party,” said Alabama Congresswoman Terri Sewell, who organized the panel. “We’re taking our seat at the table.”

This has been an election cycle where incumbency hasn’t been as impenetrable as it has been traditionally. For example, Pressley and Hayes managed to win their nominations despite the party —-and in some cases, the CBC—- endorsing incumbents.

Because of this, they had to take a different route to win; a route that involved bringing in people whose voices weren’t always heard.

Because of this, the Democratic Party has to change where it focuses its attention. While moderate White voters should be invited into the tent, focusing completely and totally on them won’t get the job done.

“The landscape has changed,” Brown said. “We’re not longer looking for a seat at the table. It’s our table.”