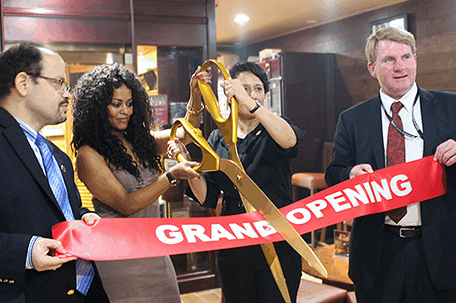 Negest Dawit, a savvy businesswoman from Ethiopia, steered her 1998 Mercedes Benz past a vacant building on 9th Street near downtown Washington, D.C. and gazed into her future.

“I looked at the building and said ‘This will be my store,’” Dawit told Urban News Service.

But her journey from Ethiopia to entrepreneurship was not easy.

She moved from that East African nation to Canada in 1996 and worked as a housekeeper. That job paid the bills, she said, but not one she wanted for long.

“I only had $50 when I got to Canada,” she said. “My mother gave me the money.” Dawit sat in her modest apartment, talked to her sister, and, during meals, discussed her future.

In 2000, Dawit packed her bags and moved to Washington, D.C. seeking better opportunities. She spent four years at an Ethiopian restaurant on U Street.

Even as she waited tables there, she planned her next move, next job, and next challenge.

“It was very hard moving here,” she said. “I had to learn the streets, the Metro, driving. It was a lot to learn. I moved here and started from scratch.”

And there also was the language: Dawit learned English at school in Ethiopia and speaks it well. But her thick accent reveals her African heritage.

Dawit took a job at Presidential Cigars at Union Station in 2004, and it changed her life.

“They taught me everything I know about cigars,” she said. “I worked in sales, and I learned the business. And the owner encouraged me to open my own business.”

And that’s just what she did.

“I was a housekeeper, a waitress, a cigar saleswoman, and then I opened my own cigar store,” Dawit said. She now is Washington’s only female cigar store owner.

“Customers ask if they can speak with the owner, and they are surprised when I tell them I’m the owner,” Dawit said.

Dawit opened her business in 2006 after standing inside the dusty storefront building and imagining how her operation would look after she renovated.

“It was formerly a T-Mobile store,” Dawit said. “It was dirty, and it needed a lot of work. But it was mine.”

“I was checking out local cigar shops, doing research to launch my own line of cigars, ‘Blacksmoke,’ which I eventually did,” he said.

Jackson said he was immediately drawn to Dawit.

“She was absolutely beautiful and very knowledgeable about cigars,” Jackson said.

But opening her own store had its unique challenges, Dawit said. She required inventory — $30,000 to start — and needed people to vouch for her, tough things for someone just getting started.

“They were asking me for referrals, but I didn’t have any,” Dawit said. “It was a challenge. I built relationships with sales people and wholesalers, and they helped me build my inventory, and some gave me credit.”

Dawit now has a $500,000 inventory and is arranging to buy the property, which she now leases. She has more than 3,500 customers, some of whom pack into the shop seven days a week to smoke cigars, sip Scotch, and network with other smokers.

“My customers include businessmen, politicians, and cigar club members,” Dawit said. “One third of my customers are women.”

She said the three cigar clubs that loyally meet at her store help her business flourish.

“They feel like they are at home,” she said.

Dawit proudly points to the 2,000 cigar bands for sale inside her state-of-the-art glass-case humidors. 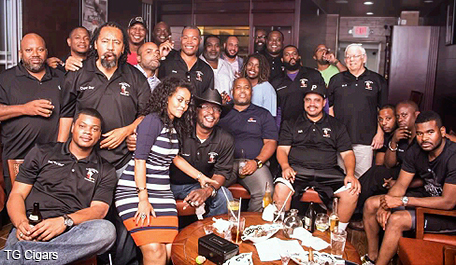 The aroma of cigar smoke fills Dawit’s spacious location. Next to the well-stocked bar is a roomy lounge with comfortable seats and a large flat-screen TV.

While nearly 13 billion cigars were sold in America in 2015, according to the Center for Disease Control, Dawit is not the typical cigar store owner: She doesn’t smoke.

“I don’t smoke cigars, and I don’t drink,” Dawit said as she walks through her stylish venue, and cigar smoke hangs in the air. “But I do offer my customers a great deal of knowledge about cigars.”

Dawit is friendly, attractive and formidable. She has a sly smile, long black hair that flows over her shoulders, and a sultry accent that hints of mystery.

“TG’s gift is certainly her personality,” said Jackson. “She hugs people, shakes hands, it’s a genuine passion for her business and it brings folks back.”

And she drives to work in her 2017 Range Rover.

“I know everything there is to know about cigars,” Dawit said. “I can smell cigars, roll them, merchandise them, and sell them. I just don’t smoke them.”