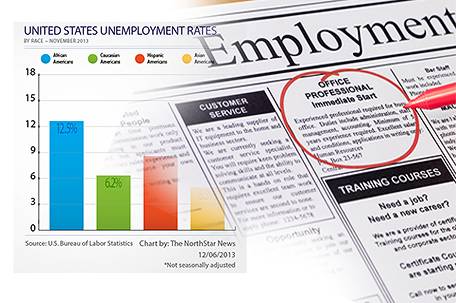 The seasonally adjusted unemployment rate for African-Americans dropped in November as the nation’s nonfarm payroll expanded by 203,000 jobs, which was stronger than what many analysts had expected.

The jobless rate for blacks, however, was still much higher compared to whites, to Hispanics and to Asians, the U.S. Bureau of Labor Statistics reported this morning.

The jobless rate in November for Black women 20 years old and older was 11.1 percent, compared to 11.5 percent in October, BLS reported.

White women 20 years old and older reported the nation’s lowest jobless rate on a seasonally adjusted basis. Last month, their unemployment rate was 5.3 percent, down from 5.5 percent in October.

The Washington, D.C.-based Center for Economic and Policy Research reported that the number of jobs created in November was the second-consecutive month that the economy added more than 200,0000 jobs.  In October, the nonfarm payroll expanded by a revised 200,000 jobs.

“It was impressive that the jobs gains were broadly spread across industries,” the Center for Economic and Policy Research reported. “Manufacturing added 27,000 jobs after adding 16,000 in October. This is the largest two-month gain since February and March of 2012.”

BLS also reported job gains in warehousing, health care, professional and business services, retail, construction, leisure and hospitality. The Bureau of Labor Statistics noted, however, that 7.7 million workers were employed part-time and that there 762,000 discouraged workers in November.  These are workers who have stopped looking.