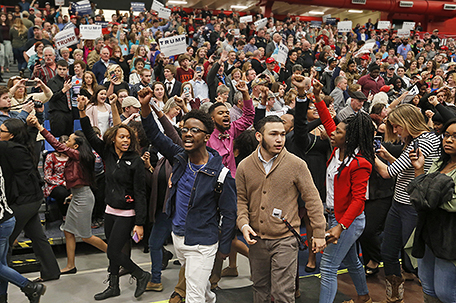 ABOVE PHOTO:  Protesters are escorted out of a rally for Republican presidential candidate, Donald Trump at Radford University in Radford, Va., Monday, Feb. 29, 2016.   (AP Photo/Steve Helber)

An estimated 30 Black students were squired away from a Donald Trump rally in Valdosta, Georgia by Secret Service agents who said the Republican presidential candidate had requested their removal before he began speaking, reports USA Today.

The incident occurred Monday at Valdosta State University, causing a stir on the campus that was Whites-only until 1963, the report says:

“We didn’t plan to do anything,” said a tearful Tahjila Davis, a 19-year-old mass media major, who was among the Valdosta State University students who was removed.

“They said, ‘This is Trump’s property; it’s a private event.’ But I paid my tuition to be here.”

Trump campaign spokeswoman Hope Hicks in an email late Monday night denied that the students were shown the door “at the request of the candidate.”

Trump was confronted by more Black protesters early Monday on the campus of Radford University in Virginia. They were removed from the rally by Secret Service after they began chanting: “No more hate! No more hate! Let’s be equal, let’s be great!” the report says.

Black Lives Matter protesters have challenged the Republican front-runner at past rallies, but he is being hit from all sides after failing to immediately condemn support from David Duke, a prominent White supremacist.