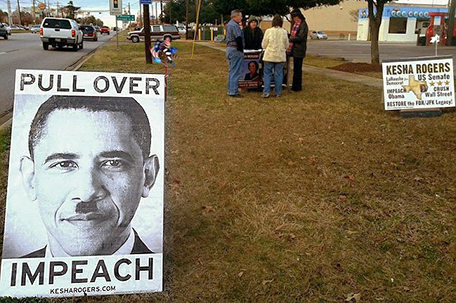 ABOVE PHOTO: (Photo: News One)

News One reports that rabble-rousing Texan, Kesha Rogers, an African-American running for the U.S. Senate as a Democrat, wants President Barack Obama impeached and seemingly gets a kick out of drawing Hitler mustaches on images him as well. Even though the young politico polls higher than her Democratic counterparts, fellow Texas party members want to distance themselves from her, according to Daily Mail.

The 35-year-old woman ran for Congress in 2010 and in 2012 winning the Democratic primary both times. During her 2012 campaign, Rogers went in hard on Obama and even produced an anti-Obama music video titled, “Super-Ego-Genocidal-Narcissist-Psychosis!” set to the tune of the Mary Poppins famed “Supercalifragilisticexpialidocious.” 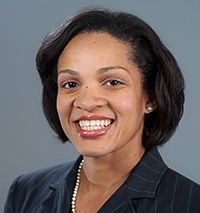 Rogers’ campaign manager Ian Overton told the Daily Mail that the statewide party “attempted to hide our campaign from their websites.” He went on to reveal that the African-American Political Alliance, which has quite a bit of political clout in the state, “have purposely said she’s running in a different race than for the U.S. Senate. The Texas [Democratic Party] executive committee has passed resolutions condemning her candidacy and denying all support or acknowledgments,” Overton said. “They are more committed to sinking with the ship than returning to the Constitution.”

Rogers, who reportedly down to under $27,000 in donations and is still leading the Democratic pack, has a political platform that has raised more than few eyebrows. Rogers is a staunch follower of the Lyndon Larouche who heads the fringe political movement that bears his name. Larouche, who is 91, has been oftentimes referred to as the leader of a political cult and an anti-Semite. A few times, Larouche has run for the Democratic nomination for the presidency unsuccessfully. He has also been convicted of mail fraud. Larouche’s acolytes, a youth movement of followers in the U.S. and abroad, believe that his ideologies can transform them into authentic geniuses and stop the wars in Iraq and Afghanistan and save the world from a coming nuclear war.

Rogers believes in interplanetary defense, protecting the earth from asteroids and America from nuclear missiles from hostile lands.  She also believes in the colonization of Mars, which is why the politician is vehemently opposed to any cuts in the NASA budget.

Rogers has even compared the Affordable Care Act to 1930s-era Nazi eugenics policies.

Anti-terrorism success may not help Obama in 2012