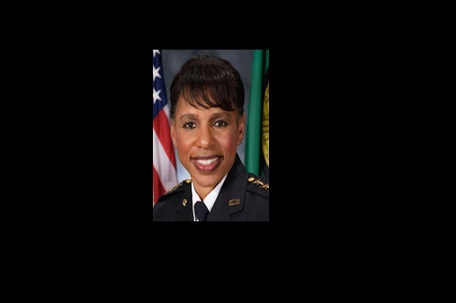 SEATTLE (AP) — Efforts to cut spending on police — a key demand of anti-racism demonstrators across the nation — have claimed an unlikely target: Seattle’s first Black police chief, who enjoyed deep support in its minority communities, is stepping down in protest.

Carmen Best announced her retirement Monday night, just hours after the City Council voted to cut her annual $285,000 salary by $10,000, as well as the salaries of her command staff, and to trim as many as 100 officers from a force of 1,400 through layoffs and attrition.

She said Tuesday that she was OK with her pay cut, but not with having to lay off young officers, many of them minorities hired in part to improve the department’s diversity. “That, for me — I’m done. Can’t do it,” she said at a news conference.

“It really is about the overarching lack of respect for the officers.”

Best, a military veteran who joined the department in 1992, was named chief two years ago. Mayor Jenny Durkan initially left her off a list of finalists for the job, but selected her after an outcry from community groups who had long known Best and wanted her to be chosen.

Durkan praised Best’s service and commitment to improving policing in the city Tuesday. She noted that Best had established a “collaborative policing bureau” to focus on youth violence prevention and other issues, added mental health workers in precincts, brought back community service officers and sought ways to reduce the burden of 911 calls — all before the protests that erupted after George Floyd’s killing by Minneapolis police.

“Of all the major cities in America, Seattle had the chief that not only understands the lived experience of Black America — because it is her experience — but has the deep experience in policing needed to change it,” Durkan said.

Deputy Chief Adrian Diaz, who heads the collaborative policing bureau, was named interim chief when Best’s resignation takes effect Sept. 2. Durkan said she would not begin looking to hire a permanent replacement, given the city’s dire economic outlook amid the pandemic as well as uncertainty about the future role of policing.

City Council members and residents alike had criticized Durkan and Best for the department’s response to protests against police brutality prompted by Floyd’s killing. Officers repeatedly used tear gas, blast balls, pepper spray and other less-lethal weapons indiscriminately and at times without provocation, prompting a federal judge to restrain their use.

Best insisted that officers had a right to defend themselves.

Many of her supporters — even those who considered the department’s protest response heavy-handed — saw her retirement as unfortunate.

“All these organizations that have been pushing for police reform, we all believe Chief Best is a good chief,” said Linh Thai, managing director of the Vietnamese Community Leadership Institute. “We want her at the helm.”

“It does nothing to further our fight for authentic police accountability and the safety of Black lives, that the first Black woman to hold the position of Chief of Police of the Seattle Police Department has been forced out of her job by the Seattle City Council,” the organization said.

U.S. Attorney General William Barr also lamented Best’s departure: “This experience should be a lesson to state and local leaders about the real costs of irresponsible proposals to defund the police.”

The council voted Monday to cut the department’s current $400 million budget by less than 1%, which advocates described as a down payment on more ambitious cuts — including removing 911 dispatch from the department and other changes.

Herbold said she was sorry if Best felt targeted or disrespected by the council’s actions.

“Every major city in the nation has a police chief who is learning that leadership means understanding that they may need to figure out how to accept — and get their departments to accept — that the public wants less policing and more community safety,” Herbold said.