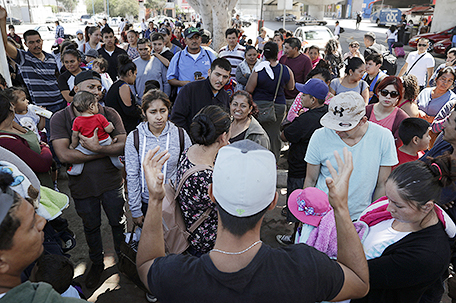 ABOVE PHOTO: An organizer, foreground, speaks to families as they wait to request political asylum in the United States, across the border in Tijuana, Mexico. In Tijuana, Latin Americans fleeing drug violence in their countries are camped out and waiting to apply for U.S. asylum – undeterred by the new directive from Attorney General Jeff Sessions this week to bar victims of gang violence from qualifying. (AP Photo/Gregory Bull)

The Council of Bishops of the African Methodist Episcopal Church, along with the Revs. Jesse Jackson and William Barber, in separate statements, called Sessions’ use of biblical scripture incorrect.

“The Bible does not justify discrimination masked as racism, sexism, economic inequality, oppression or the abuse of children,” said the council, leaders of the denomination.

In May, Sessions expressed that there will be “zero tolerance” for anyone who crossed the border illegally. About 2,000 children have been separated from their families at the border over a six-week period of crackdowns on illegal entry into the United States, according to the Department of Homeland Security.

During a speech to law enforcement on Thursday, Sessions said: “I would cite you to the Apostle Paul and his clear and wise command in Romans 13, to obey the laws of the government because God has ordained them for the purpose of order.”

The Justice Department did not immediately return e-mailed requests for comment.

The bishops called for House Speaker Paul Ryan and other Republican lawmakers to reprimand Sessions.

“Why are Black and Brown immigrants living in America with fear that the American dream has become a nightmare for the least, the last, and left out?” the AME clergy said in a statement.

“Twisting the word of God in defense of immoral practices was a tactic used to justify keeping Black people in chattel slavery, committing genocide against Native Americans and segregating people under Jim Crow,” said Barber and Liz Theoharis, co-chairs of the Poor People’s Campaign, in a separate statement.

Jackson was also critical of Sessions, saying in the past, Bible verses have been used to justify various atrocities. “The government tolerated lynching just like they tolerated slavery,” said Jackson.