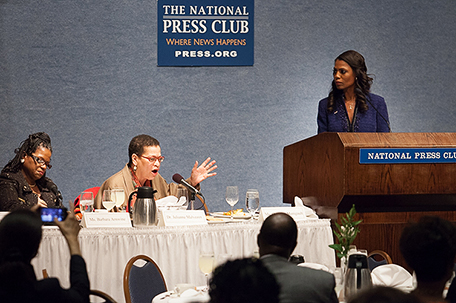 A Women’s History Month/Black Press forum to respond to President Barack Obama’s “My Brother’s Keeper” initiative ended up being a critique of his administration over all.

“I’ve had the feeling that he’s been running from us. There was pressure to act like he was not the Black president,” said award-winning journalist and author Dr. Barbara Reynolds. “I understand that you had to put us at the end. But establish something that will last in every governmental department.”

The annual commemoration of Women’s History Month, sponsored by Trice Edney Communications & News Wire, is called “Stateswomen for Justice”. It drew an audience of 200 to the Ballroom of the National Press Club March 20.  This year’s forum entitled, “How to Move from Chaos to Community: Our Response to My Brother’s Keeper,” also drew responses to President Obama’s style of leadership.

Referencing the 1970’s song by Roberta Flack and Donny Hathaway, “Be Real Black for Me,” Dr. Julianne Malveaux, syndicated columnist and president Emeritus of Bennett College for Women, stated: “If I had an opportunity to talk to President Obama, I would engage him in a slow dance and say be real Black for me.”

Malveaux continued, “Because the fact is that he ain’t been real Black just yet. He’s been great and late with ‘My Brother’s Keeper’ and he has been missing in action with Parent PLUS [an education loan program] which has caused us in HBCU land to lose over 16,000 students.” Parent PLUS recently tightened lending practices for parents with financial shortcomings.

The forum, featuring five women panelists, all renowned for their leadership, was moderated by reality star Omarosa Manigault, also an educator, activist and former White House appointee. It was also a celebration of the 187th anniversary of the Black Press by focusing on those issues written about daily in Black newspapers.

President Obama held several meetings and conversations with heads of major Black organizations as he prepared to roll out the new initiative, which was announced early this month. On the “Stateswomen” panel, those leaders also gave sober advice.

Panelist Melanie Campbell, President/CEO of the National Coalition on Black Civic Participation and Convener of the Black Women’s Roundtable, who met with Obama only days before he announced the initiatives, wants the legislation to be in place beyond President Obama’s term. She also hopes that his administration will look to the local community.

“The initiative needs to be connected to the community, despite who is in office,” stated Campbell.  “The community needs to get the resources to run the programs,” she said.

Barbara Arnwine, president and executive director of the Lawyers’ Committee for Civil Rights Under Law, first met with the President’s staff in 2009 with her concerns. She said there is a need to have targeted jobs programs that reach African-American youth. She emphasized that education needs to be addressed, especially among African-Americans without high school diplomas and GEDs.

Panelists also highlighted the many contributions of Black women, who alongside their male counterparts, fought for freedom and equality.

Dr. E. Faye Williams, with the National Chair of the National Congress of Black Women, attended the White House initiative announcement. She does not want the role of women to be eliminated from the “My Brother’s Keeper” dialogue.

“Now just because there is a program called ‘My Brother’s Keeper’ does not mean that we sisters will not have to be our brother’s and sister’s keepers, but it sure is good to have some help…this year,” stated Williams.

National Urban League President Marc Morial, as a co-sponsor of the event, praised “My Brother’s Keeper” as a step forward for African-American youth.

“I congratulate the president for taking this issue on in such a public and forceful fashion,” said Morial, who is a financial advisor for the initiative. He encouraged individuals who are connected with organizations and communities that have initiatives that focus on boys and men of color to share their findings with the White House.

Malveaux concluded: “History belongs to she who holds the pen, so we have to continue to write our stories and tell our stories. In Women’s History Month, we have to remember that African-American women have been sidelined and we have to tell our story. And in regard to the President’s initiative we have to make sure that while we lift up our brothers, women are also lifted up.”