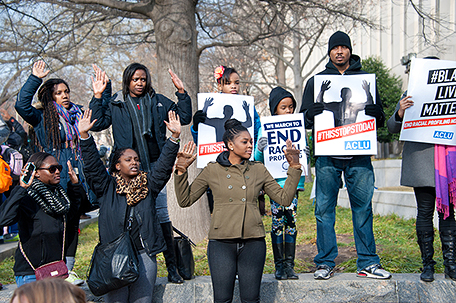 What it means to be black in America today lies at the complex intersection of race, class and space, says Tufts sociologist Orly Clerge, who is working on a book about the diversity of black identity in the United States. It compares the black immigrant experience to that of the African American middle class.

Clerge, an assistant professor of sociology and Africana studies in Tufts’ School of Arts and Sciences, says she is trying to gain a better understanding of the meanings attached to blackness. How blacks define it for themselves has important political and social ramifications, she says. For example, greater cooperation between an increasingly socioeconomically and ethnically diverse black community will help create political change in the face of contemporary racial inequality, as happened during the civil rights movement of the 1960s.

The increased stratification of the black community in large part came in the wake of the 1964 Civil Rights Act, which helped give rise to the black middle class, Clerge says. At the same time, the foreign-born black population was also on the rise. In 1960, just 13.4 percent of black Americans were middle class, earning between $35,000 and $100,000 annually, according to a 2005 report by the U.S. Civil Rights Commission. By 2009, that number had grown to nearly 50 percent of the 14.7 million all-black households, according to the U.S. Census Bureau.

Clerge talked with Tufts Now about how demographic transformation in the African-American community has changed black identity in the last 40 years and what that means politically.

Tufts Now: How would you define black identity in America today?

OC: The legacy of the Transatlantic Slave Trade and colonialism has left an enduring mark on how race is defined today. Being of African origins automatically relegates blacks in America to a lower social status, which is facilitated by white racial attitudes and systematic policies barring their full participation in American society.

My research focuses on how everyday middle-class people manage and negotiate being black within these confining structural arrangements. I find that foreign-and native-born blacks define their black identities in various ways. Some are strongly attached to their black racial identity, while others participate in contextual and situational racial identity work, regardless of how the outside world perceives their skin color. Attachments to “blackness” are related to a host of competing identities such as gender, generation, age, sexuality, place of residence and exposure to non-blacks.

TN: How does this affect the ability of black Americans to advance political and social change?

OC: While various social movements organized and executed by blacks in the U.S. and abroad, such as Brazil and South Africa, have brought about significant ruptures in totalitarian white control, social change will only be systematic and effective if white Americans release their dominance over political and economic resources.

That said, blacks play a role in this process as well. Many members of the black community don’t have a fair shot in the U.S., and there is data that backs up that contention: lower homeownership rates, wages, educational attainment, marriage rates, even infant mortality—black women are twice as likely to have children who die in infancy than white women.

But if all blacks, including black immigrants and the black middle class, don’t see this inequality as a common struggle—as they did when overcoming segregation and discrimination during the civil rights movement—I don’t see that the necessary conditions will be in place to disrupt and transform the current racial and class inequalities.

TN: You participated in protests following the shooting deaths by white police of unarmed black citizens Michael Brown in Ferguson and Eric Garner in New York. What did you find most significant in terms of these political actions?

OC: What was interesting about these protests was that despite generational, economic, ethnic and educational differences, all classes of the black community came together to confront and denounce discrimination and brutality against their black children. We see the ways in which class and ethnic differences melt away in the face of common racial struggle. Many middle-class black families—foreign- and native-born—noted that their neighborhoods are just as hyper-policed as low-income black neighborhoods.

This common social problem gives rise to what political scientists call linked fate among a complex and sometimes divided black population. The shootings and ensuing protests compelled the black middle class to reflect on what it is doing—and what it can do—to ensure the inclusion and protection of their children.

OC: Since the inception of the slavery-based economic system in the U.S., there have been classes of blacks, defined by skin color as well as the nature of the work they did—house slaves were considered to have a higher status than slaves who worked in the plantation fields, for example. In 1899, W.E.B. DuBois described the residential distribution and social standing of the black business-owning class in Philadelphia’s seventh ward.

TN: But the black middle class has grown in unprecedented numbers since the civil rights movement in the 1960s, primarily through affirmative action and other government mandates to integrate predominantly white spaces and end the exclusion of blacks.

OC: Yet the black middle class has been undermined through the recent national housing crisis, which ravaged many urban and suburban black communities. The famous saying “When America gets a cold, black America get the flu” hit home for the black middle class, whose homeownership, and therefore wealth, was undercut during the recent recession. By 2009, the median net worth of all black Americans—holdings such as real estate, stocks, business equity and vehicles, minus liabilities—was $11,000. The median net worth of white Americans, by contrast, was $141,009, according to the Pew Research Center.

TN: The black middle class often works and lives in predominantly white spaces. Are they experiencing the same racial discrimination as blacks that are economically less well off?

OC: Because of increased integration into white spaces, today’s black middle class experiences significant racial hostility and discrimination compared to their low-income counterparts. Before the mid-1960s, middle-class blacks were strategically segregated into black areas of cities and suburbs by larger white society through social intimidation tactics and violence.

The shift from overt to covert forms of racism means that black middle-class families are interacting with whites who may not be comfortable with them being in the same economic and social space as them. For my book project, I am exploring how they negotiate and manage being economically and physically integrated, yet racially excluded in diverse racial environments.

TN: And what are you discovering?

OC: While African Americans and black immigrants in the middle class spend a significant amount of time navigating racially problematic or hostile situations, black identity is not simply seen as an imposed racial category, but one that is positively internally defined and transmitted across generations. There were also various iterations of expressing blackness. Respondents who had strong attachments to the being black in my study often noted that participating in what they saw as black life was a social, cultural, spiritual and economic resource that was valuable and central to who they were as people, a reality that is often overlooked in mass media and the social sciences.

The harsh realities of being Black in America