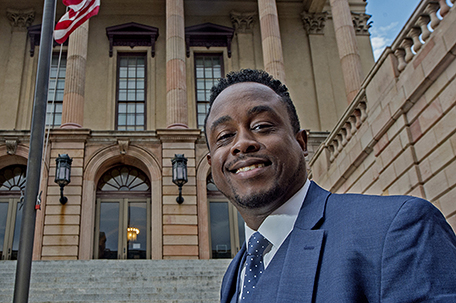 Robinson is sliding into home plate, his right leg leading the way, angling to avoid the tag. His arms are outstretched for balance, and he looks confident and determined.

The iconic image of Robinson, the barrier-breaking Brooklyn Dodger and pioneer for equality on and off the baseball field, resonates with Greene — a lifelong New York Mets fan — on more than one level.

“I didn’t know when I got into this job that I was in a position to be like Jackie Robinson,” Greene, 32, says.

Greene is likely one of the first Black assistant district attorneys in Lancaster County, according to interviews with colleagues and newspaper records. William C. Haynes was named the first Black assistant district attorney in 1980. But Greene’s colleagues say they don’t remember another Black person holding the position until he was hired, likely making him the second.

Greene, who started in the district attorney’s office in August 2017, was promoted to chief of the juvenile division in May 2019. The journey hasn’t always been easy.

“When I first started, for the first six months, I would show up to a preliminary hearing and the first question would be ‘Where’s your attorney?’ ” Greene says. “Why automatically assume I’m not the assistant district attorney? That’s how I know this is something that needs to be addressed.”

“I can tell you that during my 20 years on the bench, I don’t recall another person of color.”

Studies on race breakdown at district attorney’s offices nationally aren’t available, but statistics looking specifically at elected prosecutors illustrate a racial disparity: According to a report from the Reflective Democracy Campaign, which analyzes the demographics of power in the United States, 95% of elected prosecutors are white. That percentage has remained unchanged since 2015, the previous time Reflective Democracy analyzed that specific demographic.

“I can tell you that during my 20 years on the bench, I don’t recall another person of color,” says President Judge David Ashworth, who has more than 40 years of local experience as a judge and a former lawyer.

As Greene reviews cases and prepares for court, he does with the photo of Robinson — cool, confident and strong — watching over him in his office.

“I love that picture. That hit me when I hung that picture up in my office,” says Greene, of Manheim Township. “I’m not saying that I deal with the same stuff he dealt with, but when I look at that picture, it kind of reminds me that this is not going to be easy and to try my best to act in a way that’s not going to prevent someone behind me from coming in.”

As a juvenile prosecutor, Greene has the unique opportunity to change the direction of young people’s lives. The juvenile court can work with people as young as 10 years old all the way to 21 in some cases.

“That’s the goal, and that’s why I jumped at the opportunity to get into the juvenile division. I take that to heart,” Greene says. “I try to put the kids in the best position to succeed so we don’t see them at the adult level.”

Greene says he’s been able to see changes in juveniles as they go through the system.

“We put a lot of services in place for the juvenile, and they have to come back to court every six months for a progress update,” Greene says.

“I’ve had kids that come in and they were angry at the world, fighting everyone and then they come back a year and half, two years after the process and they look like a totally different person. Some have thanked me in open court for what I did on their cases a year ago. It’s phenomenal. That’s how I know I’m making a difference.”

Greene also works with kids outside the courtroom. Last summer, he enforced a different set of rules as an umpire with the Lancaster County Youth Baseball League.

“I love it,” Greene says. “I do it just to get out in the community and make sure the kids are learning the game right, and I’m hoping to do that again next year.”

Greene also educates young people as an adjunct professor of Juvenile Law and Justice at Elizabethtown College, where he just started teaching virtually and in-person this semester. Dr. Conrad Kanagy, a professor of sociology there, recruited and hired Greene.

“Lance is able to take our students into the heart of the criminal justice system through relevant case studies and his own personal experiences,” Kanagy says. “I am impressed with his passion for changing what needs to be changed and his willingness to pay the costs for doing so. As he noted, there are not many African American prosecutors, but he is driven by a passion to bring justice and fairness to that space of the criminal justice system.”’

“I wanted to be a prosecutor since I was 10 years old. My uncle was a prosecutor in the Philly DA’s office, and he took me to one of the historical courtrooms in Philly and put me up on the stand and started questioning me. And in that moment, I knew I wanted to do this.”

Greene grew up in Brooklyn, New York, and moved with his family to Long Island around the age of 12. And though Greene was a serious athlete in high school and college, he says he always wanted to work in criminal justice.

“This is my dream job,” Greene says.

Greene attended Temple University, where he met his wife, Courtney, who works as a producer at WGAL.

Both Greene and his wife were on the Temple track team. Greene did the long jump and triple jump; his wife was a sprinter.

Greene is still an athlete and enjoys riding his bike around Lancaster County. In between college and law school, Greene accompanied his uncle, the district attorney, on a bike trip from Pittsburgh to D.C.

After graduating from Suffolk Law School in Boston, Massachusetts, where he was president of the Black Law Student Association, and a stint working as a clerk in Virginia, Greene and his wife relocated to Lancaster County where Courtney, a Manheim Township High School graduate, grew up.

“I didn’t realize the extent of farmland of Lancaster County when I first moved here,” Greene says. “My father-in-law joked with me when we’re driving with the windows down. You get the fresh manure smell. I was like ‘What’s that smell?’ and he’s like ‘That’s fresh air, son.’ ”

Paul Mimidis, Greene’s father-in-law, arranged a meeting with President Judge Ashworth, who was a Tang Soo Do student at Mimidis’ Karate for many years.

“When I first met Lance I found him to be a very personable and bright young man, and I thought he had a great deal of potential,” Ashworth says.

He thought Greene’s demeanor was well-suited for a life in criminal justice.

“The juvenile court is a very unique proceeding, because the entire focus is towards trying to rehabilitate young people so that they don’t become adult criminals,” Ashworth says. “I think Lance has the personality and the passion to do that.”

In the wake of the killings of Breonna Taylor, George Floyd and countless other Black people by police officers, a demand for equal treatment has sparked Black Lives Matter protests and other calls for racial justice.

As a Black man in law enforcement, Greene walks a fine line of wanting to be a part of changing the system while recognizing the importance of police. He says people sometimes ask him how he can be a part of a system that seems to treat people that look like him unfairly.

“Law enforcement officers, specifically cops, are feeling that they can’t do anything right at this moment,” Greene says. “I think that needs to be acknowledged, but the reason we’ve gotten to that point is because of how many times it’s happened before. Police officers around Lancaster County are good people. But we’re not just talking about Lancaster County.

“Look at what happened in Kenosha, Wisconsin. That’s basically a ‘Lancaster County’ of Wisconsin,” Greene says, referencing Jacob Blake, who was shot and seriously injured by police officers. “We need those good officers to hold those bad officers accountable, and that requires a change within the makeup of all police organizations,” Greene says.

Greene says he thinks that part of the problem is that police departments and law enforcement officers don’t always accurately represent the communities they are protecting and serving.

He says he’s witnessed defendants become more at ease seeing someone that looks like them across the aisle. Greene says that in close confines of the court setting, he’s often able to hear defendants whisper to their attorneys.

“They say ‘Yo, who’s that guy over there? That Black dude.’ And the defense attorney responds, ‘That’s the assistant district attorney,’ ” Greene says. “I make eye contact with them, and I don’t say anything, but I can immediately tell in their eyes and their body posture that they know they’re going to get a fair shot.

“They are like ‘OK this guy might know where I’m coming from,’ ” Greene says. “Now, again, I don’t want this to seem like I’m trying to keep people out of jail. My job is to ensure justice is done fairly and appropriately in each particular situation. But how can you possibly say that you’re doing that if you can’t even understand where some people are coming from?”

Greene says he understands people’s frustrations with law enforcement, and is hopeful that change can happen to make the system more accurately represent the population it serves.

“I’m trying to talk to anybody that’s willing to hear about the lack of diversity in the justice system,” Greene says. “I think people know it’s a problem, but they don’t know how to address it. That’s why I’m here. I think it’s possible, but I think it’s going to be very difficult unless we have people that acknowledge a change needs to happen and simply listen. It’s not going to happen overnight, but you need to have people like me, that are willing to stay in the system and fight.”

Greene says he’s also been frustrated with recent current events. But he’s reminded of the reasons he was so eager to work with juveniles: to provide a positive example, and show them that if he can be in a position of authority, then they can, too.

“I’m not trying to toot my own horn. I’m just saying we need people who are willing to be in tough positions and are willing to break the mold and break the pattern,” Greene says. “I think I’m causing change just simply from me being here. We have to make the system seem welcome to everybody and it doesn’t seem that way when everyone looks like one race.”