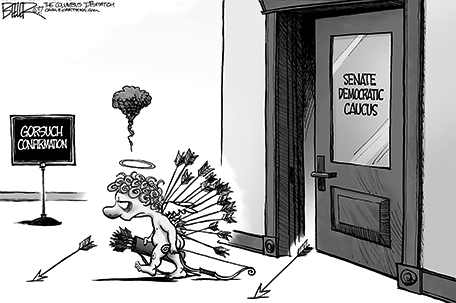 By Erica Werner and Mark Sherman

The nominee himself, Judge Neil Gorsuch of the Denver-based 10th U.S. Circuit Court of Appeals, seemed almost an afterthought at times, sitting alone at the witness table, occasionally nodding or taking notes, as the 20 members of the Judiciary Committee took turns delivering lengthy and partisan opening statements.

Gorsuch got his chance to speak at the end of the day Monday, delivering his own opening statement, and questioning began on Tuesday. Committee Chairman Chuck Grassley, R-Iowa, announced the panel would vote on Gorsuch’s nomination April 3, with a vote on the Senate floor expected later that week.

In his opening statement, Grassley alluded caustically to Democrats’ complaints about judicial independence in the Trump era. Gorsuch told several lawmakers privately that he was disheartened by Trump’s attacks on judges who ruled against him over his immigration ban, but that didn’t go far enough for Democrats.

“In recent months I’ve heard that ‘now more than ever’ we need a justice who is independent, and who respects the separation of powers,” Grassley said. “Some of my colleagues seem to have rediscovered an appreciation for the need to confine each branch of government to its proper sphere.”

Grassley continued by praising Gorsuch’s record in that area, saying “his grasp on the separation of powers – including judicial independence – enlivens his body of work.”

Democrats, under intense pressure from liberal base voters horrified by the Trump presidency, entered the hearings divided over how hard to fight Gorsuch’s nomination given that the mild-mannered jurist is no right-wing bomb thrower and is widely expected to win confirmation in the end, one way or another.

But even while insisting they would evaluate Gorsuch fairly, several spoke angrily about the treatment of Judge Merrick Garland, President Barack Obama’s Supreme Court nominee, who was denied so much as a hearing for 10 months last year by Senate Republicans. They also took shots at Trump himself, and criticized the fact that Gorsuch appeared on a list of potential Supreme Court nominees vetted by the Federalist Society and Heritage Foundation.

“Senate Republicans made a big show last year about respecting the voice of the American people in this process,” said Sen. Patrick Leahy, D-Vt. “Now they are arguing that the Senate should rubber stamp a nominee selected by extreme interest groups and nominated by a president who lost the popular vote by nearly 3 million votes.”

Sen. Dick Durbin, D-Ill., repeated a comment by White House chief of staff Reince Priebus last month that Gorsuch “represents the type of judge that has the vision of Donald Trump.”

“I want to hear from you why Mr. Priebus would say that,” Durbin said to Gorsuch. “Most Americans question whether we need a Supreme Court justice with the vision of Donald Trump.”

“If you believe this has been a great plan to get a Trump nominee on the court you had to believe Trump was going to win to begin with. I didn’t believe it,” said Sen. Lindsey Graham, R-S.C. “I’m trying to hear someone over there tell me why he’s not qualified,” Graham said of Gorsuch.

“You’re not a politician running for election, judge, as you know,” Cornyn said. “I would encourage my colleagues to carefully consider the nominee on the merits and nothing else.”

Gorsuch, 49, is a respected, highly credentialed and conservative judge with a legal philosophy akin to Scalia’s. He arrived in the large and crowded hearing room Monday with amiable smiles all around, and introduced his wife, Louise, and other family members as well as law clerks, remarking, “I consider them family, too.”

Several of the more liberal Senate Democrats have already announced plans to oppose Gorsuch and seek to block his nomination from coming to a final vote. But delay tactics by Democrats could lead Senate Majority Leader Mitch McConnell to exercise procedural maneuvers of his own to eliminate the 60-vote filibuster threshold now in place for Supreme Court nominations, and with it any Democratic leverage to influence the next Supreme Court fight.

Republicans control the Senate 52-48. The filibuster rule when invoked requires 60 of the 100 votes to advance a bill or nomination, contrasted with the simple 51-vote majority that applies in most cases.