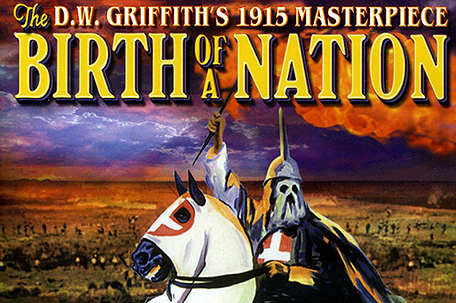 NEW YORK–One hundred years ago this spring, Hollywood came of age in a blaze of wonder and fury.

D.W. Griffith’s three-hour Civil War epic, The Birth of a Nation was released in April 1915 after a special showing in March at President Woodrow Wilson’s White House. It is widely recognized as a blueprint for the feature-length movie and as a showcase for Griffith’s Tolstoyan command of historical narrative, from the battlefield to the front porch.

But one of the greatest glories in movie history is also one of its lasting shames. Within Griffith’s lovingly assembled images is a story that glorified the Ku Klux Klan, demonized Blacks and sealed the misconception that the Reconstruction era in the South was a disastrous experiment in racial equality.

So now, at the film’s centennial, an industry that loves and thrives on honoring its past may allow one of its defining moments to go largely unobserved.

Turner Classic Movies, one of the prime outlets for silent cinema, is uncertain how or whether to mark the anniversary, said Charles Tabesh, senior vice president.

“It’s not just something you can put in the schedule,’’ he said. TCM has occasionally aired the film, which is in the public domain, but he explained, “We’ve provided an introduction and explained why it’s on, but even with that, we’ve gotten responses ranging from minor complaints to a lot of people who were really upset about it. It’s difficult because for a channel like Turner Classic Movies you can’t just avoid it. It wouldn’t be appropriate to pretend it was never made.’’

No film before had so forcefully, or painfully, demonstrated that the big screen could challenge the novel and textbook as a way of interpreting and thinking about the past. James Baldwin would damn it as “an elaborate justification of mass murder.’’ Eric Foner, a leading Reconstruction historian, said in a recent interview that the film did “irreparable damage to public consciousness and also to race relations.’’ Fellow scholar Annette Gordon-Reed calls Griffith both a genius and a “lousy historian.’’

Over the past quarter century, The Birth of a Nation has been enshrined and entombed.

In 1992, to much criticism, the Library of Congress added Griffith’s work to the National Film Registry, calling it a “controversial, explicitly racist, but landmark American film masterpiece.’’ For decades, the Directors Guild of America awarded a D.W. Griffith Award for lifetime achievement, but dropped the prize in 1999 to “create a new ultimate honor for film directors that better reflects the sensibilities of our society at this time in our national history.’’

In 1998, the American Film Institute listed Birth of a Nation at No. 44 on a list of the best 100 American movies. The film does not appear on a 2007 AFI “Best 100’’ list, which instead features Intolerance, Griffith’s atonement for Birth. A planned screening in 2004 at a Los Angeles theater was cancelled because of protests.

The classroom and the DVD are the most likely places to see it now. In 2011, Kino Lorber released a DVD and Blu-Ray edition with a restored print, extensive notes and a brief documentary explaining the film’s context. Kino special projects producer Bret Wood says the company receives occasional complaints for selling the film, but that Birth of a Nation is consistently among the most purchased silent movies.

“It’s a difficult thing to do, marketing a cinematic masterpiece that is also hate-mongering propaganda, but that in itself is why the film is so powerful,’’ Wood wrote in an email. “If it were simply a racist film, it would have faded away long ago. But because The Birth of a Nation is such a magnificent film (in terms of cinematic artistry in 1915), the cancerous ideology at its core is all the more toxic, and so we find ourselves continuing to discuss it a full century later.’’

Jeanine Basinger, a film historian who teaches at Wesleyan University, says Birth is taught in different ways. A history professor might screen excerpts to show how some Americans thought of the Civil War, while a film instructor might focus on the film’s aesthetic achievements.

“In film departments, we aren’t teaching content, we are teaching the medium itself and its development,’’ Basinger says.

The Birth of a Nation is historical drama, but for the director it was something close to emotional autobiography. David Wark Griffith was born in Kentucky in 1875, just a decade after the Civil War ended. His father was a lieutenant colonel in the Confederate Army, and Griffith grew up in the early Jim Crow era. Although Kentucky was a border state that did not secede and was relatively unaffected by Reconstruction, Griffith related to the source material for Birth of a Nation, Thomas Dixon’s novel and play The Clansman.

“Griffith did not question the core assumption of Dixon’s story: that blacks, once the supposedly benevolent bonds of slavery had been overthrown, became violent and threatening to whites, especially women,’’ says Melvyn Stokes, author of “D.W. Griffith’s The Birth of a Nation.’’

He was a man of the late 19th century mastering the tools of a revolutionary medium of the 20th century, moving images. After several years of acting and script writing, he directed his first movie, in 1908. By 1914, Griffith was among the country’s top directors.

“As he refined and developed his filmmaking art, he became ambitious to do longer, more ‘epic’ films,’’ Stokes said, noting that Griffith had studied the Italian production Quo Vadis and a French production, Queen Elizabeth.

“He was also keen to produce works like these based on history, since historical subjects were seen as a means of making motion pictures `respectable’ and appealing to the more lucrative, middle-class audience.’’

In making Birth of a Nation, Griffith wedded mass spectacle and groundbreaking art and helped change forever the role of movies and what they could achieve.

Earlier films often lasted less than an hour and were completed within days. Birth of a Nation took six months to produce, had a running time of 195 minutes and employed hundreds of actors. Griffith’s epic also helped popularize such techniques as the panoramic shot, the panning shot and the tinting of the lens. The battlefield scenes, still compelling in their momentum and violence, set the template for countless war movies over the following decades. The soundtrack was among the first to feature a popular theme song.

The film made history before reaching theaters. In March 1915, Birth of a Nation became the first moving picture to be screened at the White House, then occupied by Wilson, Thomas Dixon’s former Johns Hopkins University classmate and fellow Southerner.

The White House event resulted in one of film’s most famous blurbs. “It is like writing history with lightning. And my only regret is that it is all so terribly true,’’ Wilson was supposed to have commented. Biographer A. Scott Berg is almost certain he never said it.

“The line does not appear for decades, not even in Dixon’s unpublished memoirs,’’ Berg wrote in an email, adding that Wilson was known for his reactionary views on race. “I suspect that it got cobbled together as civil rights became more of an issue and people looked back on Birth of a Nation seeing it through new and more enlightened eyes. And, as Wilson’s stock in the area of civil rights sank, it became an easy quotation to attribute to him.’’

Virtually everything about Birth of a Nation was outsized and new. Moviegoers were charged $2 a ticket (around $46 in 2015) at a time when you could see an afternoon of comedy shorts for pennies. The film helped mark the transition from nickelodeons to gilded movie “palaces.’’ The cast included some of the greatest directors of the talking era, among them Raoul Walsh (who played John Wilkes Booth) and John Ford (who played a Klansman).

In theaters, whites reveled and rampaged. In Lafayette, Indiana, a white man killed a black teen after seeing the movie. The Ku Klux Klan used the film for decades to recruit members.

The NAACP, founded just a few years earlier, demanded that a few especially racist scenes be deleted and despaired over the damage.

“The harm it is doing the colored people cannot be estimated,’’ wrote the association’s secretary, Mary Childs Nerney. “I hear echoes of it wherever I go and have no doubt that this was in the mind of the people who are producing it. Their profits here are something like $14,000 a day and their expenses about $400.’’

His influence acknowledged even by his detractors, Griffith was revered by Orson Welles and Stanley Kubrick, among others. Leading critics have praised Birth of a Nation on artistic grounds, and even moral grounds. Roger Ebert wrote that Griffith “demonstrated to every filmmaker and moviegoer who followed him what a movie was, and what a movie could be.’’ James Agee, mourning Griffith’s death in 1948, wrote: “For all its imperfections and absurdities it is equal, in fact, to the best work that has been done in this country. And among moving pictures it is alone…’’

The Tennessee-born Agee lamented that criticism of the movie had led to its being restricted, or abridged. “At best, this is nonsense, and at worst, it is vicious nonsense. Even if it were an anti-Negro movie, a work of such quality should be shown, and shown whole. But the accusation is unjust. Griffith went to almost preposterous lengths to be fair to the Negroes as he understood them, and he understood them as a good type of Southerner does.’’

Black filmmakers responded forcefully to Birth of a Nation and across generations. In 1919, Oscar Micheaux made Within Our Gates, a blunt portrait of white violence and among the earliest surviving movies by a black director. In 1980, Spike Lee was a film major at New York University when he completed the 20-minute The Answer, in which a young black screenwriter is asked by a Hollywood studio to turn out a script for a remake of Birth of a Nation.

Paul D. Miller, aka the hip-hop and performance artist DJ Spooky, saw Birth of a Nation while attending Bowdoin College and recalled how it echoed in his mind “because of so many of the issues that keep resurfacing in American culture.’’ In 2004, DJ Spooky premiered “Rebirth of a Nation,’’ a multimedia stage event and later a film that remixed excerpts from Griffith’s movie with contemporary images, music and commentary.

Miller finds Birth of a Nation so influential, technically and aesthetically, he even thought about it while designing his iPad app.

“As much as possible I want to think about mobile media as the inheritors of the cinematic imaginary,’’ he wrote in an email. “Cell phones, tablets, and other portable media have set the stage for a new kind of multimedia experience. Birth of a Nation set the tone for that as well.’’ 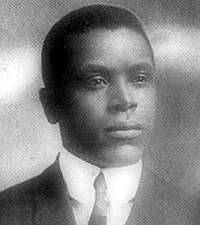 Oscar D. Micheaux--January 2, 1884 – March 25, 1951 was an American author, film director and independent producer of more than 44 films. Although the short-lived, The Micheaux Book & Film Company produced some films, he is regarded as the first major African-American feature filmmaker, the most successful African-American filmmaker of the first half of the twentieth century and the most prominent producer of race films. He produced both silent films and “talkies” after the industry changed to incorporate speaking actors.  Micheaux’s second silent film was Within Our Gates, produced in 1920. Although sometimes considered his response to the film Birth of a Nation, Micheaux said that he created it independently as a response to the widespread social instability following World War I. Within Our Gates revolved around the main character, Sylvia Landry, a mixed-race school teacher.