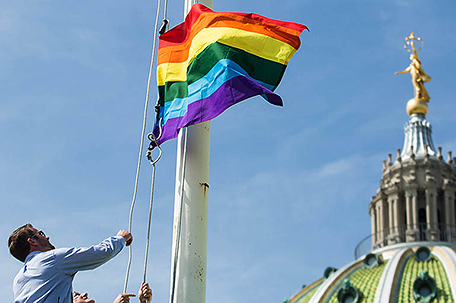 HARRISBURG, Pa. — A U.S. Supreme Court ruling Monday will extend legal protection to gay, lesbian and transgender people from discrimination at certain workplaces across all of Pennsylvania, but advocates for LGBT rights say a years-long fight for civil rights in the state Legislature is not over.

To be sure, LGBT rights advocates in Pennsylvania hailed the high court’s ruling as a historic victory.

But the court’s ruling does not cover people who work for smaller employers, and it does not extend legal protection against discrimination to housing or public services, LGBT rights advocates in Pennsylvania said.

“We need to update state law not only to include what the Supreme Court has ruled but to provide complete protection as we do with other classes of people,” said Jason Landau Goodman, executive director of the Pennsylvania Youth Congress.

Long-standing opposition by Republicans who control both chambers of the Legislature has spurred advocates to work at the municipal level. That has resulted in LGBT rights protections in 58 municipalities covering roughly one-third of Pennsylvania’s population, according to the Pennsylvania Youth Congress.

Even before Monday, most states had adopted no laws that prohibit workplace discrimination targeting LGBTQ employees. For years in Pennsylvania, Democrats have fought to add categories — sexual orientation and gender identity or expression — to a state law that empowers the state Human Relations Commission to investigate complaints of discrimination in employment, housing and public services because of someone’s race, sex, religion, age or disability. The commission can impose civil penalties, such as back pay or damages.

Opponents suggested that such legislation could violate religious liberties or freedom of conscience.

Gov. Tom Wolf, a Democrat, has staunchly backed the legislation. While the legislation was stalled, Wolf in 2016 signed an executive order barring state contractors and grant recipients from discriminating based on sexual orientation or gender identity.

Asked about the court’s decision Monday, Wolf said it was “about time,” but he also echoed Goodman and other LGBT rights advocates, including the American Civil Liberties Union, in saying that work remains to be done in Pennsylvania.

Other governors have acted, amid legislative inaction. In 1975, then-Gov. Milton Shapp issued an executive order barring employment discrimination based on sexual orientation in state employment and, in 2003, then-Gov. Ed Rendell issued an order extending that protection to gender identity or expression for state employees.

Goodman said 2020 may yet bring action. While most top Republicans have not moved to advance LGBT rights bills, Goodman said the bills this year are in committees with friendlier chairpersons.