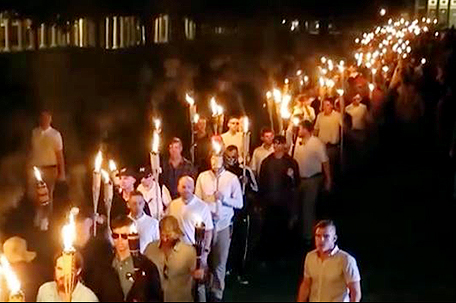 Former Senator and Vice President Joseph Biden, after much suspense, has finally entered the Democratic campaign for president – immediately surging ahead of a crowded field with a message against White supremacy.

“We saw Klansmen and White supremacists and Neo Nazis come out in the open, their crazed faces illuminated by veins bulging and baring the fangs of racism,” Biden said in a video announcement, with images of the violent 2017 White supremacist march in Charlottesville, Virginia juxtaposed with images representing America’s promise that “all men are created equal.” He called the incident in Charlottesville in which the young activist Heather Heyer was killed, “a defining moment of this nation.”

Biden’s entry not only brings a new voice to the field of 21 candidates who have announced so far, but a voice taking direct aim at incumbent Donald Trump.

He continued in the video, “And they were met with a courageous group of Americans. And a violent clash ensued. And a brave young woman lost her life. And that’s when we heard the words of the President of the United States that stunned the world and shocked the conscious of this nation. He said, there were quote, ‘some very fine people on both sides.’”

Biden said with those words, “the President of the United States assigned a moral equivalency between those spreading hate and those with the courage to stand against it. In that moment, I knew the threat to this nation wasn’t like any other I’d ever seen in my lifetime. I wrote at the time that were ‘in the battle for the soul of this nation.”

He said eight years of the Trump Presidency would “forever and fundamentally alter the character of this nation, who we are. And I cannot stand by and watch that happen.”

Biden has since catapulted to the forefront of the other Democratic candidates. But his race will not be easy. Trump has already taken aim, calling him, “Sleepy Joe” an attempt to pin a nickname on him, as he has successfully done to many other candidates.

Trump spokespersons have defended his words about Charlottesville, saying he did in fact condemn racism and antisemitism as well. But despite his successes with maintaining economic growth started by President Obama, the Trump years have been so far full of insults to people of color including calling members of the National Football League “Sons of Bs” for protesting unwarranted police violence against Black people.

No viable Republican candidates have challenged Trump so far. And most Black Republicans and even conservative Christians have remained silent amidst what some deem as deplorable conduct; such as the “SOB” remark as well as hundreds of documented untruths.

So far, Democratic candidates have dealt mainly with key issues with little or no mention of Trump’s leaning on a base that often appears largely White nationalists.

Among the dominant issues dealt with thus far have been the economy, whether all incarcerated people should be allowed to vote while in prison and whether there should be a commission to discuss ways to issue reparations for slavery.

CNN reports that Biden now tops the field with more than 37 percent of Democrats saying they would vote for him if the election were elected today. He is followed in diminishing order by Sen. Bernie Sanders Sanders of Vermont; South Bend, Indiana Mayor Pete Buttigieg; Sen. Kamala D. Harris; Sen. Elizabeth Warren; Congressman Beto O’Rourke, and Sens. Amy Klobuchar and Cory Booker.

Biden will also face opposition from Democrats who will point to a political record that includes his treatment of now Professor Anita Hill during the confirmation of Clarence Thomas, something  for which he recently tried to make amends. Hill did not think his apology was strong enough. Biden is also remembered for his leadership on legislation that led to the growth of mass incarceration of Black people through the so-called “war on drugs.”