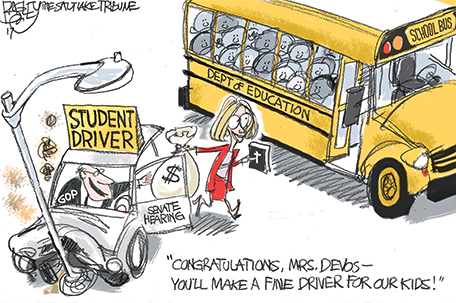 Students at historically black colleges originally had no choice.

“They are living proof that when more options are provided to students, they are afforded greater access and greater quality,” she continued. “Their success has shown that more options help students flourish.”

But lauding HBCUs as “real pioneers when it comes to school choice” overlooks the fact that they were historically the only options available to Black students denied entry to traditionally white institutions.

And because states have historically prioritized White schools  —  many of which necessitated the formation of HBCUs by refusing to integrate  —  HBCUs have been persistently underfunded.

“Historically Black colleges and universities  —  those institutions of higher education founded prior to 1964 with the principal mission of educating Black Americans excluded from segregated public and private universities  —  have never enjoyed levels of public funding comparable with other institutions,” notes a Politico Magazine feature on HBCUs. “This persistent inequality has led some states, including Maryland and Mississippi, to be sued for failing to fund Black and White public colleges at equal levels.”

One HBCU president who met with Trump and DeVos on Monday was frustrated with how things went.

In a blog post, Walter Kimbrough, president of Dillard University in New Orleans, wrote that plans for the day “blew up” after the HBCU leaders were taken to the Oval Office to meet with Trump.

“I’m still processing that entire experience. But needless to say that threw the day off and there was very little listening to HBCU presidents today — we were only given about 2 minutes each, and that was cut to one minute, so only about 7 of maybe 15 or so speakers were given an opportunity today,” Kimbrough wrote.

In the prepared remarks that Kimbrough never had the opportunity to share with Trump, he planned to criticize “the education as a private good philosophy” that he says has emerged over the last 50 years.

Kimbrough went on to make a case that Pell Grants should be the equalizer.

In her second week on the job, DeVos has shown she distrusts department staff and plans an audit of all programs.

But DeVos doesn’t seem particularly concerned about racial disparities in education. During a recent interview with Axios, she didn’t acknowledge that civil rights issues in schools are an ongoing concern.

DeVos said Title IX and school desegregation remain important issues, but when asked if there are “remaining issues like that” where the federal government should intervene, she responded, “I can’t think of any now.”