Benghazi suspect in US custody for 2012 attack 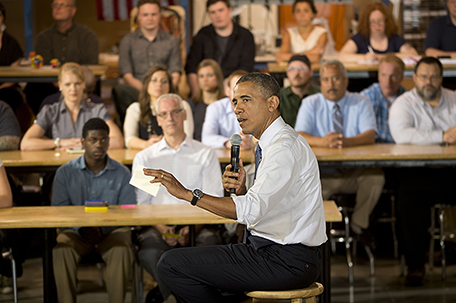 ABOVE PHOTO:  President Barack Obama speaks about the capture of Libyan militant suspected of killing Americans in Benghazi, during his visit to TechShop in Pittsburgh, Pa., Tuesday, June 17, 2014. Obama says he authorized an operation in Libya to detain Ahmed Abu Khattala. His capture marks the first apprehension of an alleged perpetrator in the 2012 attack that killed U.S. ambassador Chris Stevens and three other Americans.   (AP Photo/Pablo Martinez Monsivais)

WASHINGTON– A Libyan militant suspected in the deadly Sept. 11, 2012, attack on Americans in Benghazi has been captured and is in U.S. custody, marking the first U.S. apprehension of an alleged perpetrator in the assault that killed U.S. Ambassador Chris Stevens and three other Americans.

President Barack Obama said Ahmed Abu Khattala, a senior leader of the Benghazi branch of the terror group Ansar al-Shariah in Libya, will “now face the full weight of the American justice system.”

“The fact that he is now in U.S. custody is a testament to the painstaking efforts of our military, law enforcement, and intelligence personnel,” said Obama, whose administration has come under intense criticism from Republicans for being unable to apprehend those responsible for the attack.

Abu Khattala, who will be tried in U.S. court, was captured by U.S. forces on Sunday and is being held in an undisclosed location outside of Libya, according to the Pentagon press secretary, Navy Rear Adm. John Kirby.

Stevens was the first U.S. ambassador to be killed in the line of duty in more than 30 years.

Last year, the U.S. filed charges against Abu Khattala and a number of others in a sealed complaint in U.S. District Court in Washington. The complaint, unsealed Tuesday, charges Abu Khattala with providing, attempting and conspiring to provide material support to terrorists that resulted in death; discharging, brandishing, using, carrying and possessing a firearm during a crime of violence; and killing a person in the course of an attack on a federal facility and conspiring to do so.

Officials said he could face the death penalty if convicted of the latter charge.

Until now, no one had been arrested in the attack in which a group of militants set fire to the U.S. diplomatic mission in Benghazi.

As the U.S. raid took place Sunday, forces loyal to a renegade general attacked Islamic militant camps in Benghazi as part of a new assault against the groups. Airstrikes targeted the camps on behalf of Gen. Khalifa Hifter, a top military official under dictator Moammar Gadhafi who later defected and lived for years in the U.S.

It isn’t clear what the strikes targeted. The general later said the clashes killed five of his fighters. Hifter’s forces have targeted Ansar al-Shariah, a hard-line Islamist militia blamed for the attack on the U.S. Consulate there.

In August, Abu Khattala told The Associated Press that he was not in hiding, nor had he been questioned by Libyan authorities over the consulate attack. Abu Khattala was the commander of a militia group called Abu Obaida Bin Jarrah at the time of the attack. In August, he said he had abandoned the militia and begun working as a construction contractor.

“I am a Libyan citizen and the American government has nothing to do with me,” he said. “I am in my city, having a normal life and have no troubles and if they have an inquiry to make, they should get in touch with Libyan authorities.”

Efforts to reach Abu Khattala Tuesday were not successful, as his mobile phone was apparently turned off.

According to a U.S. official, the operation that captured Abu Khattala was planned over a long period of time and executed by U.S. special operations forces. The official, who spoke on condition of anonymity because he wasn’t authorized to disclose sensitive details by name, said the operation was conducted in conjunction with the FBI.

In the immediate aftermath of the stunning attack, political reaction formed along partisan lines that hold fast to this day.

Republican presidential nominee Mitt Romney and others said Obama had emboldened Islamic extremists by being weak against terrorism. But the public still credited Obama with the successful strike against al-Qaida leader Osama bin Laden a few months earlier in Pakistan.

The accusation that took hold was a Republican charge that the White House intentionally misled voters by portraying the Benghazi assault as one of the many protests over an anti-Muslim video made in America, instead of a calculated terrorist attack under his watch.

Obama accused the Republicans of politicizing a national tragedy. He insists that the narrative about the video protests was the best information available at the time.

After 13 public hearings, the release of 25,000 pages of documents and 50 separate briefings over the past year and a half, the arguments are the same.

US ambassador killed in consulate attack in Libya

Libya: The beginning of Obama’s quagmire?