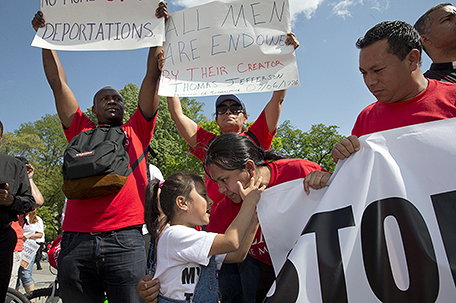 ABOVE PHOTO:  Madai Ledezma-Dominguez, center, says goodbye to her daughter Heather Pina Ledezma, next to her husband Jose Pina, of Riverdale, Md., as the couple took part in an act of civil disobedience and were later arrested on Pennsylvania Avenue in front of the White House in Washington, Thursday, May 1, 2014. The march and rally were in protest of ongoing deportations and lack of progress on comprehensive immigration reform in Congress.  (AP Photo/Jacquelyn Martin)

That was the speech I heard last Wednesday from Yahir Servin, an 11-year-old who participated in a civil disobedience on Capitol Hill with the Fair Immigration Reform Movement. Yahir was one of seven kids between the ages of 11 and 17 who joined 20 adults in a jail cell all afternoon to draw attention to the need for immigration reform. As rain poured down, the protesters sat resolutely in the middle of the street outside Capitol Hill while police handcuffed them one by one.

A few blocks away, the U.S. House of Representatives was in session but immigration reform was not on the agenda. Even though every day of inaction means that more immigrants are evicted and more families broken up, the House has still not taken up the comprehensive reform bill that passed in the Senate, or offered an alternative of its own. Meanwhile, although President Barack Obama has been an outspoken supporter of reform, deportations have risen significantly over the course of his presidency.

Immediately before the protest, a 16-year-old named Talia Gonzalez told a heartbreaking story about her family’s situation. Her father had returned to Mexico in order to get the necessary documentation to become a citizen. The U.S. officials at the Mexican border told him that he could not return. For the past four years, Talia and her father have only seen each other a handful of times, a mountain of paperwork separating father and daughter.

She is not alone. According to a 2012 report by the Center for American Progress, one out of three U.S. citizen children of immigrants live in mixed-status families, and tens of thousands of parents are deported each year. This has a devastating impact on families, forcing children into foster care or leaving single mothers who struggle to make ends meet.

I stood with the protesters on Wednesday because I believe that immigrants of all colors deserve to be treated with dignity and fairness. This has been a priority for the civil rights community for a very long time. It was a priority for Frederick Douglass when he opposed the Chinese Exclusion Act in the years after the Civil War, arguing in effect that he did not intend to watch the government brutally exploit workers in the Southwest just after ending slavery in the Southeast. It was a priority for civil rights leaders in the 1960’s, who, immediately after passing the Voting Rights Act and Civil Rights Act, pushed through what historian Taylor Branch has called through the “third pillar” of the civil rights revolution – ending the racist Europe-only preference for immigrants in this country.

As Douglass, Ella Baker and Roy Wilkins understood, our communities are strongest when we are willing to stand up for our neighbors’ families with the same passion that we fight for our own.

There is reason for optimism. A number of Republican lawmakers have spoken out recently, urging their colleagues to take a vote on immigration reform. The pressure on these intransigent legislators will only increase as more people, young and old, stand up to make their voices heard on the issue.

By going to jail for their cause, Yahir and the other young protestors took a page from the Birmingham Children’s Crusade of 1963. We all know the iconic images of children locking hands, marching in step and singing “We Shall Overcome” as Bull Connor’s deputies blasted them with fire hoses. Fewer may remember that some of the children’s parents had second thoughts about letting their little ones out in the charged Birmingham streets.

In a speech that week, Dr. King was able to put the situation in perspective, in words that called to mind the actions of Yahir, Talia and the other young activists half a century later.

“Don’t worry about your children,” he said, “They are going to be alright. Don’t hold them back if they want to go to jail, for they are not only doing a job for themselves, but for all of America and for all of mankind.”

Jealous is the former President and CEO of the NAACP. He is currently a Partner at Kapor Capital and a Senior Fellow at the Center for American Progress.