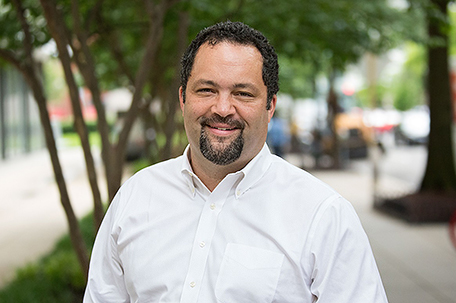 Last week, Jealous announced that he’s running for Governor of Maryland on the Democratic ticket. He’s entering a crowded field for the Maryland Primary on June 26 that includes seven challengers .

Jealous most recent political experience was as a surrogate for Vermont Sen. Bernie Sanders (I- VT)during his run for the Democratic Presidential nominee.

Because of his long record of civil rights advocacy and the diversity of the state of Maryland, Jealous believes he has the most to offer, he said.

“When I was president of the NAACP, I learned just how quickly my neighbors here were prepared to move forward on civil rights,” Jealous said. “In one year, we abolished the death penalty, we passed marriage equality, we passed the Dream Act. I’m running for governor because I believe we’re prepared to move just as quickly in moving forward on our education, on employment, [and] on the environment while continuing to protect civil rights,. “I’m running for governor because I believe we can do much better by our kids right now.”

Because the national Republican Party is dealing with a scandal-laden Trump administration with a 60 percent disappoval rating, Jealous believes that voters might send the GOP a message by sending Republican Gov. Larry Hogan  packing. Hogan was elected in the traditionally Democratic state in 2014, and is eligible to run for re-election this year.

“Larry Hogan is governor of Maryland because in 2014, we had a high tide of Republican turnout and an ebb tide of Democratic turnout,” Jealous said. In this era of President [Donald] Trump, they can only remember having a president that is competent to serve. And now they see the impact of having a president that is quite the opposite. So long as we turn out Democratic voters who are used to voting in gubernatorial elections, there’s almost no way that he can win.”

But before he marshalls the Democratic votes to beat Hogan in November,  Jealous has to distinguish himself in a crowded Democratic field. In that regard, he may just have a not-so-secret weapon in Sanders. Should he get that endorsement, it may bolster his chances significantly.

When asked if he could expect the Sanders endorsement, Jealous replied, “Let’s just see.”

Sanders won 36 percent of the vote in Maryland’s Democratic presidential primary. If Jealous can win a majority of those voters, plus a significant portion of Maryland’s 45 percent Black vote, he is a strong contender to win the Democratic nomination.

But the key will be to exciting the Democratic base enough to get it to the polls, something that Jealous believes his record can do. Maryland has a 45 percent White constituency and 10 percent that encompasses other races. Jealous believes his background and civil rights record could attract a following similar to the “Rainbow Coalition” that was amassed during the Jesse Jackson presidential campaign, for which Jealous also worked in 1988.

Jealous was born in Pacific Grove, Califorina. But his parents, an interracial couple, had met in Baltimore. His father, Fred Jealous, who was White, helped integrate lunch counters in the South. His mother, Ann Jealous, worked with the Student Nonviolent Coordinating Committee in the 1960s. As a teenager, Jealous became steeped in civil and voting rights work and spent summers in Baltimore with his maternal grandparents.

Jealous’ career has been woven with civil rights and politics. Between 2000-2004 he served as executive director of the National Newspaper Publishers Association (NNPA). Earlier in his career, he’d worked as an editor for the historic Jackson Advocate newspaper in Mississippi.

After NNPA, he became founding director of Amnesty International’s U. S. Human Rights Program. In 2008, he became the historically youngest NAACP president at the age of 35, an office he held until 2012. He later became a venture capitalist with the Oakland, Calif.-based Kapor Center for Social Impact. He also played integral roles in the presidential races of President Barack Obama.

“I’m blessed to have lived my life as a progressive in the Black community who is committed to fighting for a better life for everyone in our community and ultimately for everyone in every community,” Jealous said. It’s that life, that path that starts with Jesse Jackson ’88 and goes all the way through Bernie Sanders’ 2016 campaign,” he recounted. “It’s that life that started with my parents and my grandparents rooted in the NAACP, raised in the NAACP [then] ultimately leads into the labor movement, the environmentalist movement, the LGBT movement, and the women’s rights movement. That’s me, that’s where I’m rooted, and where this campaign is rooted.”

If he wins, Jealous would become the nation’s fourth Black governor in modern history. The others were Virginia’s Gov.  L. Douglas Wilder, elected in 1989; Massachusetts’ Gov. Deval Patrick, elected in 2006, and re-elected in 2010; and New York’s Gov.  David Paterson, who served two years after the resignation of Gov. Eliot Spitzer in 2008.

Jealous, 44, has two young children to whom he often refers when expressing concerns about the future of Maryland. Reflecting on the economic deprivation that became a national spotlight during the Freddie Gray case, he accuses Hogan of having ignored Baltimore during his tenure.

“This is a governor who has shifted millions of dollars away from public education and into voucher programs and who has toured the state with [Trump-appointed Education Secretary] Betsy Devos and has embraced Attorney General Sessions’ foolishness of trying to revive the failed war on drugs by also investing millions of dollars in building up law enforcement to go after heroin addicts as law breakers rather than as people who need to be sent to rehabilitation,” he said. “The only way to create a better future for Baltimore and its residents is to have a governor who is always for all of its residents; including Baltimore. Right now it feels too often that we have a governor who is always for all of Maryland except for Baltimore…You simply cannot starve a city that’s supposed to be the economic epicenter of the state and have the state prosper.”

Ultimately, the voters of Maryland must be inspired enough to believe the election even matters.