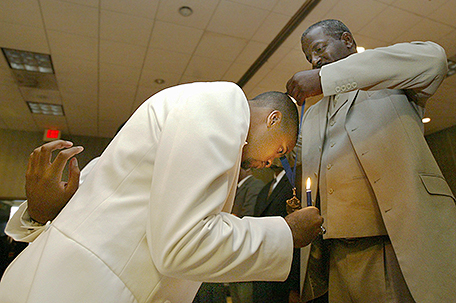 ABOVE PHOTO: Mark Turner places a medal on his son, Mark Turner II, marking the right of passage from boyhood to manhood during Phi Beta Sigma Fraternity’s Sixth Annual Scholarship Beautillion, a male debutante ball at the Wyndham Hotel on Sunday, June 10, 2007 in Richmond, Va. Beautillions are one of several rights of passage taking place across the nation giving black males positive reinforcement.  (AP Photo/Lisa Billings)

LEXINGTON, Ky.–Formal dances where debutantes in evening gowns are presented to society are called cotillions.

But last Saturday night Lexington Center was the scene of a beautillion, a rite-of-passage celebration in which 39 young Black men, or “beaus,’’ were introduced to the community.

The event was the fourth organized by Black Males Working or BMW, a privately funded program that promotes excellence in Black youths. (The program has a sister curriculum for girls called Phenomenal Ladies.)

Beautillions are more common among cities in the South. But over the last 15 years, more beautillions have been organized around the country to highlight the good in young Black men and to counter the often negative images of youths trapped in unemployment, violence and unintended fatherhood.

A beautillion is an opportunity for mothers to say, “Here’s a young man that I’m proud of, that has done well, and he does not fit the stereotype that many see when they think of African-American males,’’ said Roszalyn Akins, the founder of BMW.

Each young man and his mother entered the Bluegrass Ballroom together before a crowd of 850 people. After each teen was introduced, he bowed to the audience, hugged his mom, and then presented her with a single red rose.

Then each teen and his date took steps to a stage. The girls were all dressed in white evening gowns and wore white, elbow-length gloves. The young men were dressed in black tuxedos and tails, red vests and red bow ties. Once everyone was introduced, the couples waltzed to “Dance of the Sugar Plum Fairy’’ from “The Nutcracker.’’ Later, the teens danced with their mothers.

The high school juniors and seniors who participated in the beautillion entered BMW as middle schoolers. The program began in 2005 and is meant to close the academic achievement gap, provide preparation for college and careers, and award scholarships. It is funded through donations and fundraisers; NBA Hall of Famer Earvin “Magic’’ Johnson’s foundation has donated in the past.

Students in the BMW must limit their television watching and use of video games, read for at least one hour per night, participate in community service programs, maintain a minimum grade point average, and maintain good conduct at home, at school and in the community.

The program has a good track record. More than 75 percent of the young men in the program are in advanced placement classes in their schools.

The average ACT score for young men in the program is 22.8, which is significantly better than the average score of 16.4 for Black boys in Kentucky.

But BMW is more than academics.

“These young men have been going through etiquette classes, how to interview, how to dress for success, all of the things that will prepare them for manhood,’’ Akins said.

The program also exposes students to the world beyond Lexington.

Last year, 35 young men went to Dubai, the largest city in the United Arab Emirates. In the past, BMW has taken trips to Japan, Spain, Great Britain, France, Germany and Switzerland.

Stone Warfield, 18, took the Dubai trip and was intrigued that he could bargain with shopkeepers over prices.

“I bought an iPod, a ukulele, two decks of cards, a backpack and two bags of chamomile chocolate,’’ he said.

“I feel like he is ready to go into society, which is what this event is all about,’’ she said. “I’ve seen him really blossom in the past couple of years, and I’m very proud.’’

Shaun Anderson, 16, has no siblings, so BMW gave him a “brotherhood’’ of other teens as well as adult men who work and volunteer with the program, said his mother, Quisha Ray.

“Being a single mom and having all those men there on Saturdays to talk to him and be there as role models has been a huge help to me,’’ Ray said.

The trip to Dubai enriched his relationships with fellow students, Shaun said. “I call them my brothers because they honestly are my brothers,’’ he said. “I go to them when I need something, and I can talk to them about anything.’’

Shaun, who plans to study business and marketing in college, said he wasn’t nervous about Saturday’s dancing.

“He’s a cool as a cucumber, but I’m very nervous,’’ Ray said, laughing.