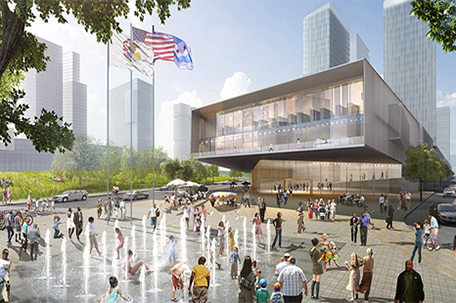 AOVE PHOTO:  The proposed design for the Obama Presidential Library and Museum in Chicago, Illinois

Chicago — The City of Chicago has been chosen as the official location of the soon-to-be developed Barack Obama Presidential Library and Museum, and the proposed designs are stunning! Initially, it was thought that the Obama Foundation would choose Columbia University in New York City or the University of Hawaii in Honolulu for the library’s location.

However, Chicago was able to put together a financing and real estate plan together that made sense. Plus, the library was fully backed by they city’s Mayor Rahm Emanuel – who served as the first chief of staff in the Obama administration.

The public was also leaning for Chicago because, although he is from Hawaii, the city of Chicago is the adopted hometown that fostered Obama’s political rise from state legislator to U.S. senator to President.

Meanwhile President Obama himself and First Lady Michelle are happy with the decision, and even signed off on it. Their foundation, the Barack Obama Foundation, was created in January 2014 to lay the groundwork for both of their philanthropic activities when the President leaves the White House in January 2017.

About the Museum and Library

According to the foundation’s web site, “The Barack Obama Library and Museum will preserve a moment in history – and the voices of the people who defined it – for generations to come.”

Multimedia exhibitions will interpret what Obama’s historic presidency meant to America and the world. Ongoing programming will serve as a launchpad for a new generation of active citizens.

The Library and Museum will invigorate its neighborhood through new job creation, community engagement, and ongoing partnerships with local organizations, and online exhibitions and resources will recreate the experience of visiting the Library and Museum for those who can’t make the trip.