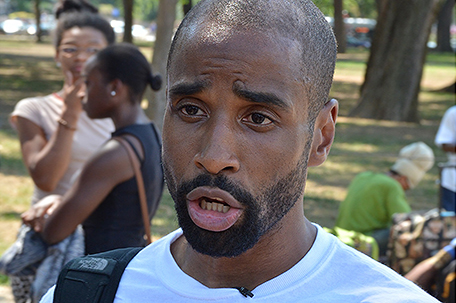 ABOEV PHOTO: Bahar Munir talks to reporters after marching from Baltimore to Washington, DC. He believes Black America has accepted defeat when it comes to the national homicide rate.  (photo by Roy Lewis/Trice Edney News Wire)

As national homicide rates climb, this group believes they have at least part of the answer.

When asked if she was familiar with the Baltimore-based group 300 Men March, Mayor Stephanie Rawlings-Blake looked bemused.

To be asked whether she is familiar with this group was baffling to her.

“That’s like asking me if I’ve heard of the Baltimore Orioles.,” she said, referencing the city’s Major League Baseball team. “I’m from Baltimore. I get it.”

As Rawlings-Blake’s response would indicate, this group of men, known for their patrolling the Baltimore streets as a display of positive force and responsible manhood amidst an often violent backdrop, have made quite a name for themselves. But as police violence against African-Americans has dominated the media, the support needed to help those doing the work against street violence appears stagnant – despite rising homicide rates across the country.

“You certainly get a whole lot of activity from people when it comes to police brutality – every time something goes on with the police and the Black man,” said Munir Bahar, ys the group’s founder and president. “But, yet, there’s not enough support and involvement on a day-to-day basis of men of color especially, but all men around the country with regards to community violence.”

The surge in national homicide statistics has been well-documented by local and national media: 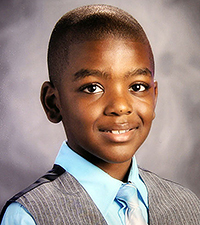 Nine-year-old Tyshawn Lee of Chicago is among the latest homicide victims. According to reports, he was shot multiple times Nov. 2 while passing through an alley near his grandmother’s house.

This week, a heart-breaking national news story focuses on the Chicago police investigation of the multiple shooting of 9-year-old Tyshawn Lee. The boy, killed on Nov. 2, while walking through an alley near his grandmother’s house, is believed to have been the target in a feud involving one or more of his relatives.

The indiscriminate killings of Black people – including babies, children, teens and adults – is a scenario that has become all too common,  Bahar said.

At this writing, the number of murders in Baltimore has surpassed 235 – well more than last year’s total of 211. In Chicago, it’s now more than 300, 20 percent up from last year’s 244.  It’s the same story in cities across the country. In Washington, DC, homicides are up 36 percent; New Orleans, up 19 percent; St. Louis, up 60 percent; and Detroit, up 50 percent since last year.

And despite a season of decline during the past decade, the numbers have continued to mount for years. In fact, since 1975, when the Federal Bureau of Investigation first began keeping homicide statistics, the combined national numbers of street homicide deaths surpass a half million. That’s enough to populate several entire cities.

As the protests and outrage over the killings of Black men and women by police officers continue around the country, this one group of Black men – 300 Men March – have decided that African-American street violence against each other is what they are called to fight. Winning the respect of their peers, they have proven to be a different kind of warrior.

To make that point nationally, Bahar, in August, led about 50 men in a march all the way from Baltimore, 35 miles South to Washington, DC.

“We wanted to take this straight to our capital, straight to the door steps of our President under the banner of the My Brother’s Keeper Initiative,” Bahar said, 35. “We announced ourselves as that group of men that have been active, that are still active, and pledge ourselves to continue to be active until we end this genocide in the country of young Black men.”

But, of course, it’s not that simple. Though he hopes to establish 300 men strong over the next five years, Bahar says they currently have about 60 faithful participants.

“We have a large amount of Black men who are literally sitting aside watching our race be destroyed from the inside. Guys who would rather go to happy hour at an all White party or a cocktail party or a whatever party than to spend that time mentoring some young people in this city,” he says.

Bahar’s nearly 12-year-old non-profit organization, COR Health Institute, which birthed the 300 vision two years ago, mentors young men in fitness, martial arts, and health programs. On the streets, the 300 Men March is symbolic of the small group of warriors in the movie, 300, who “went up against an army that everybody thought they would lose,” Bahar describes. “There was pessimism from day one. And that’s kind of what we’re dealing with the murder rate and these murders that are not only happening in Baltimore but across most urban Black cities across America. We have this sky rocketing, this insane level of violence and I feel – to be honest and I’m out there every day – I feel that a lot of people have given up. I feel that a lot of people in the Black community especially, have just accepted this. A lot of Black people have accepted defeat.”

But, the 300 men have inspired many, including Mayor Rawlings-Blake.

“I can say that level of engagement, that grass roots level is helpful because 300 Men movement speaks directly to these men that are victims of men that are perpetrators,” she said. “And really trying to speak to their hearts to let them know that there’s something different out there; and that the community needs them to stand up as men; not as violent offenders.”

Bahar says his vision is to expand nationally and to help other groups with the same goals. But resources are limited.

“There are a lot of people from Baltimore to Chicago to Los Angeles who are addressing community violence. We want to rally those individuals. We want to rally and show our support and encouragement to everybody who’s fighting the genocide of young Black men in this country,” he says.

Gaining a national reputation, the group has won the attention of the National Bankers Association and its president, Michael Grant, a key supporter who has helped to raise funds for their mission.

“So, you got this young leader, and a visionary leader who has stepped out here and who is totally committed to this cause. And he struggles to get attention from people who can help him financially. He struggles to get the support that he needs. And the question is why. Why would the Black community, especially the Black middle class and those who have resources; why would they not enthusiastically embrace this type of leadership?” Grant asked “We’re going to leave all this on the shoulders of young people without giving them financial support and moral support or even going sometimes to march with them?”

Civil rights activist the Rev. Jamal-Harrison Bryant, pastor of Baltimore’s Empowerment Temple, said some of his male members are a part of the group, which he describes as “redefining what Black male imaging looks like…For Black men to stand and let their voices be heard, this is so significant when we’ve had more than 237 homicides in Baltimore and they are overwhelming majority Black males.”

Though the 300 may feel isolated, anti-street violence activity appears back on the rise. For example, the National Week of Non-Violence, sponsored annually by the Washington, D.C.-based Black Women for Positive Change in mid-October, drew support from mayors, legislators and activists around the nation; including Ben Crump, the attorney for the family of Trayvon Martin, who is now president of the National Bar Association.

But the battle is uphill, and despite the rising death tolls, Bahar isn’t discouraged.