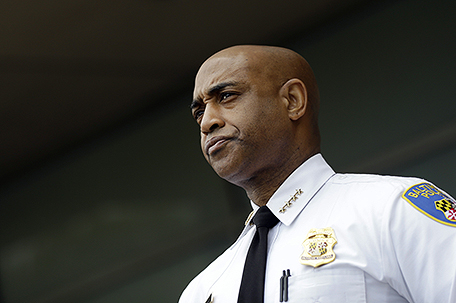 BALTIMORE — Less than three years ago, Anthony Batts was hand-picked by Baltimore Mayor Stephanie Rawlings-Blake to combat crime and reform a troubled law enforcement department in one of America’s most violent cities.

On Wednesday, Batts was fired as police commissioner amid the worst crime spike in the city since the 1970s and plummeting morale among officers who complained their boss was failing to provide the support and leadership they needed to do their jobs in the wake of the death of Freddie Gray. The 25-year-old black man died in April of injuries he received in police custody. Six police officers have been criminally charged in Gray’s death, but before charges were filed, the city saw demonstrations, looting and arson.

Deputy Police Commissioner Kevin Davis, who has only been with the department since January, will serve as interim commissioner, Rawlings-Blake said.

Batts and Rawlings-Blake are African American, as is the city’s top prosecutor, Baltimore State’s Attorney Marilyn Mosby. Davis is white. Sixty percent of the city’s population is black, while the police department is 48 percent African-American. Mosby said her office has already met with Davis and she looks forward to working with him.

The U.S. Justice Department is conducting a civil rights review of the department, and Batts announced Tuesday that an outside organization would review the police response to the unrest.

But the Baltimore police union released a scathing post-mortem report Wednesday accusing Batts and other top brass of instructing officers not to engage with rioters and to allow looting and destruction to occur.

“The officers repeatedly expressed concern that the passive response of the Baltimore police commanders to the civil unrest allowed the disorder to grow into full-scale rioting,” Gene Ryan, president of the Baltimore Fraternal Order of Police Lodge 3, wrote in the report. “The riots were preventable.”

In the weeks after the riots, homicides and other violent crimes spiked and arrests began to plummet as word spread that police officers were afraid that they, too, would be charged with crimes if something went wrong during the course of their duties.

Baltimore’s homicide total this year is 156, according to police. That’s a 48 percent increase compared with the same time last year. Shootings have increased 86 percent.

In the latest example, gunmen jumped out of two vans and fired at a group of people a few blocks from an urban university campus Tuesday night, killing three people.

The startling spike stands in stark contrast to Batts’ promise to fight violent crime when he arrived in Baltimore in 2012.

At a swearing-in ceremony in November of that year, Batts pledged to “continue our progress at reducing violent crime and holding accountable those that perpetrate violence in our good streets.”

“I worked closely with Commissioner Batts and always found him open to my ideas for reforming the department,” said Baltimore City Council President Bernard C. “Jack” Young. “He was engaging, experienced, and served our city to the best of his ability.”

But Young said that when he talked recently with citizens and police officers, “it became increasingly clear that a growing lack of confidence in the direction of our city’s crime-fighting strategy had the potential to severely damage the long-term health of our city.”

“It’s no secret there’s been great strain and stress since the uprising,” he said. “It became not just a disconnect between police and the community but between the police and their commissioner.”

In the Sandtown-Winchester neighborhood of West Baltimore, where Gray was arrested, residents praised the mayor’s decision.

Keonna Stokes, 22, said she was glad to see Batts removed from his position, and hopes a new commissioner will have a lower tolerance for police misconduct.

“The police wouldn’t do the things they do if the commissioner didn’t allow it,” she said. “He should have been fired. We call the police when we really need them, when people hurt us. But now we don’t call them, because they hurt us. If they didn’t, Freddie would still be here.”

Batts’ contract with the city paid him $190,000 and was to run through June 2020. It includes a provision for a severance payment equal to his annual salary if he is terminated without cause.

In a statement to The Baltimore Sun on Wednesday, Batts said he was honored to serve Baltimore residents.

“I’ve been proud to be a police officer for this city,” he said.